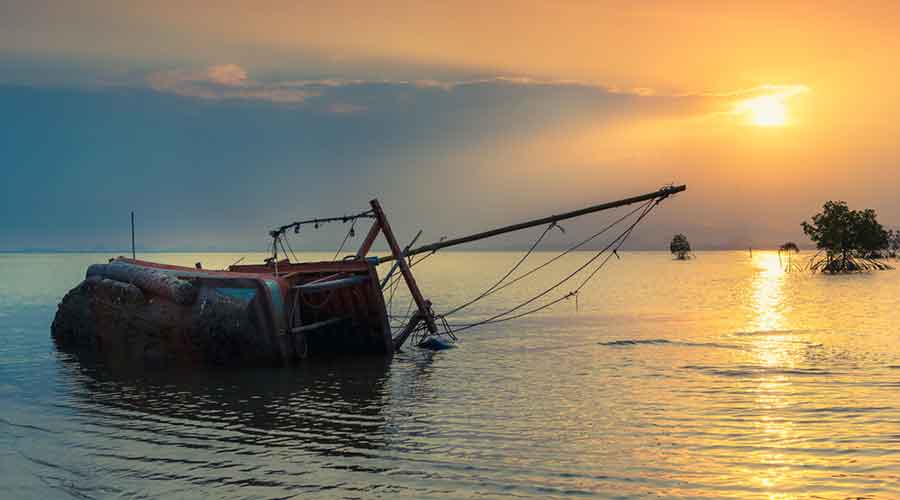 The wreckage of the boat, which was found overturned around 1.5 km downstream of the mighty Brahmaputra, was cut open from the base by NDRF and SDRF divers, but nobody was found inside it
Representational file picture
Our Bureau, PTI   |   Guwahati   |   Published 09.09.21, 11:30 AM

Overnight search and rescue operations established contacts with 84 persons, who were travelling on the ill-fated boat that capsized in the Brahmaputra river in Assam, but two persons are still missing, officials said on Thursday morning.

One person was confirmed dead after a private boat heading to Majuli sank on Wednesday evening, following a head-on collision with a government-owned ferry near Nimati Ghat in Jorhat district.

The wreckage of the boat, which was found overturned around 1.5 km downstream of the mighty Brahmaputra, was cut open from the base by NDRF and SDRF divers, but nobody was found inside it, Jorhat Deputy Commissioner Ashok Barman told PTI.

"So far, one person is confirmed dead and two persons are missing. We could do contact tracing of 84 persons to different villages in Jorhat and Majuli districts. This adds up to the presence of 87 passengers on the boat," he added.

Jorhat's Superintendent of Police Ankur Jain said the two missing persons hail from Jorhat and Lakhimpur districts, and search operation is still going on with divers from the NDRF and SDRF with backup of the Army.

"The divers on Thursday morning also went inside the boat, but could not find any body. Army divers will also search the area. Air Force will carry out an aerial survey downstream to locate the missing persons," he said.

Jorhat Medical College and Hospital's Superintendent Purnima Barua said 11 passengers were admitted to the hospital, of whom one died and three were released.

"Seven persons are still undergoing treatment, but none of them are critical. More than physical injury, they are in mental trauma," she said.

The deceased was identified as Parimita Das, who hailed from Guwahati and was working as a faculty at Rangachahi College in Majuli.

Officials of Inland Water Transport (IWT) Department said private boat 'Ma Kamala' was heading to Majuli from Nimati Ghat on the southern bank with passengers and vehicles, while government ferry 'MB Tipkai' was coming from the world's largest river island when the two collided.

As 'Ma Kamala' was run by private parties, they did not have any system to give tickets to passengers. So, the initial estimate of the passengers on board varied from 80 to 150 as per eyewitness accounts.

Transport Minister Chandra Mohan Patowary, who reached the site at around 3 am, said many heads will roll after the inquiry by Transport Secretary Jadav Saikia is complete.

"Already three officials of the IWT are suspended. Besides, 72 more IWT staffers were present at Nimati Ghat when the accident took place. Why was the boat allowed to leave when another ferry was coming at a high speed? There must be some fault of our staff," he said.

Along with Patowary, state ministers Bimal Bora and Jogen Mohan were also camping at the site to oversee the search and rescue operations.

Chief Minister Himanta Biswa Sarma visited Nimati Ghat and toured the river on a boat to assess the on-ground situation.

Officials of the IWT Department said only one ramp of Nimati Ghat is functioning at present as water level in Brahmaputra is high due to monsoon rains.

"As only one ramp is operational, any outgoing ferry has to give way to the incoming one. Ma Kamala had to leave the ghat to give way to Tipkai. While it went just a few metres, the two collided," an official said.