Advertisement
Home / North-east / Army out in Tripura too

Army out in Tripura too

Two columns of the army have been called out in the state, police said 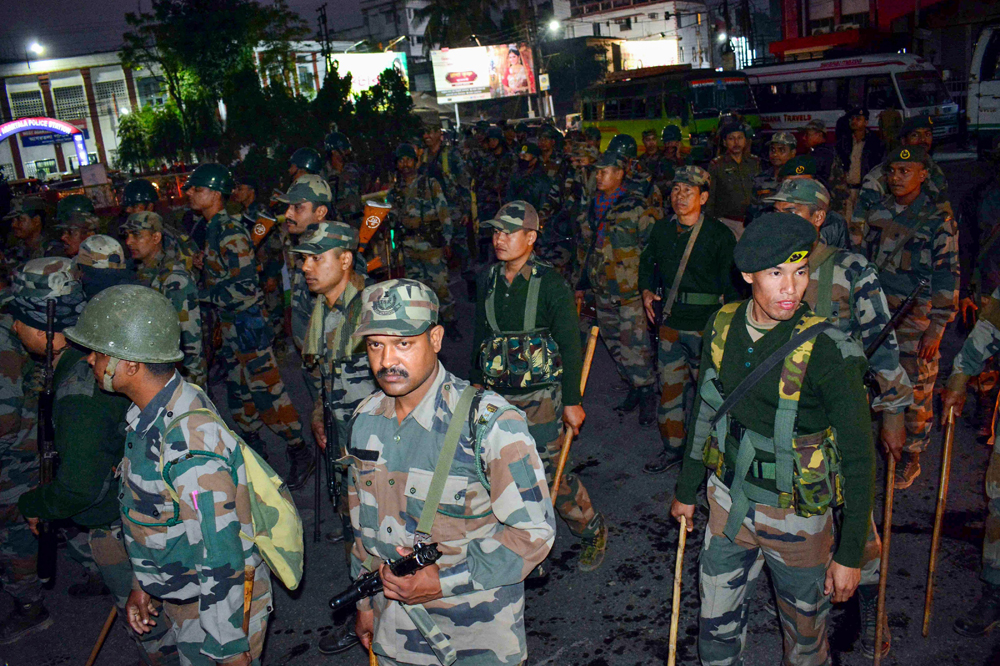 The army has been deployed in Tripura as a precautionary measure to prevent sectarian strife as an indefinite strike against the Citizenship (Amendment) Bill entered the third day in the state.

Two columns of the army have been called out in the state, police said.

Deputy inspector-general of police (Northern Range) Lalhminga Darlong confirmed that one column of the army had been deployed in Kanchanpur sub-division and the other in the Manu and Ambassa stretch of Dhalai district.

“The army has been deployed in these areas. Wherever needed, we are sending them,” Darlong told The Telegraph.

“We have imposed Section 144 (which prevents large gatherings) in some areas. And also deployed additional police, CRPF, and Tripura State Rifle across the state to prevent any untoward incident,” additional director-general of police (law and order) Rajiv Singh said.

Chief minister Biplab Kumar Deb appealed for peace. “Some political parties have called for a strike and that has affected the life in some places of the state. I appeal to the people to withdraw the strike for the sake of the people of Tripura. The state government is ready for a dialogue anytime with the leaders of the protesters,” Deb said.

The protesters include students, indigenous political leaders, civil society members and even an ally of the ruling BJP, who fear the bill would undermine the indigenous identity of the people of Tripura.

The Tripura Tribal Areas Autonomous District Council (TTAADC) areas have been excluded from the bill, which covers 68 per cent of the state’s geographical area. The protesters want the bill to be scrapped for the whole state.

The indefinite strike has been called by the Joint Movement Against Citizenship Amendment Bill (JMACB).

On Wednesday, the protesters blocked National Highway 8, which connects Tripura with Assam and other states in the Northeast and the sole railway line in West Tripura district.

Jagadish Debbarma, the senior leader and Indigenous Nationalist Party of Twipra (INPT), said even if the bill was passed in the Rajya Sabha, they would continue their movement. (The bill was passed on Wednesday night.)

“Our protest is intensifying day by day in the state. The Centre and state government should realise this and should hold discussions. We are sad that they didn’t take any initiative about it,” he said.

Asked about a reported clash, he said: “Outsiders are trying to disrupt our peaceful protest. We shall decide about the next course of the protest. If necessary, we shall move the Supreme Court.”

Panic has gripped some villages. “I am selling vegetables here for 15 years but never saw such an aggressive protest in the village. We are facing huge loss of business and we all are living here in fear,” Manoranjan Debnath, 64.