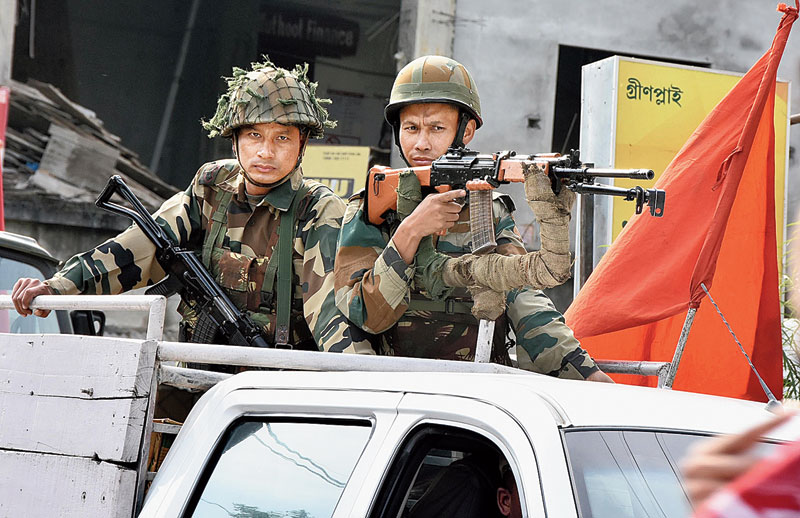 Soldiers keep vigil and conduct a flag march during curfew in Tezpur on Thursday
Picture by UB Photos
Our Special Correspondent And PTI   |   Guwahati   |   Published 12.12.19, 07:46 PM

Air and rail connectivity took a hit in Assam because of the anti-Citizenship (Amendment) Bill protests.

Altogether 13 flights and all short-distance passenger trains in the northeastern states were cancelled on Thursday and also for Friday.

A Northeast Frontier Railway (NFR) statement said, “In view of disruption of train services due to law and order problems in the state of Assam, all short distance passenger trains in the NE states have been cancelled for December 12 and 13 depending on situation.”

“However, the long distance mail/express passenger trains to and from Dibrugarh, Tinsukia, Silchar and Agartala have been short terminated and originated to and from Guwahati and Kamakhya railway stations for Thursday and Friday.”

A statement from the Northeast headquarters of the Airports Authority of India said 13 flights have been cancelled of which six were inbound and seven outbound.

Two flights each arriving and departing from Dibrugarh were cancelled.

Bhutan Airline also cancelled Guwahati-bound flight from Singapore on Thursday. It will directly go to Paro.

Indigo 6E9206 (A320) Calcutta-Dibrugrah-Calcutta arrived at 2.30pm and departed from Dibrugarh at 3pm.

Special flights are being arranged for Guwahati from Shillong. IndiGo, Vistara, Air India, SpiceJet are among the carriers that have cancelled their flights while GoAir and AirAsia India waived date change fees.

The budget airline has waived rescheduling/cancellation fees for passengers travelling to and from Guwahati, Dibrugarh and Jorhat till Friday.

Passengers stranded: The civil aviation ministry on Thursday said movement of passengers at Dibrugarh airport had been disrupted due to blockage of roads to and from the aerodrome. “In consultation with stakeholders, air operations to and from the airport shall resume as soon as the situation improves,” it said.

The ministry also said the temporary suspension of operations on Thursday was being closely monitored.

Hundreds of passengers remained stranded at the Guwahati airport. From students to working professionals and old men to young women, people were seen squatting inside or outside of the Lokpriya Gopinath Bordoloi International airport at Borjhar.

Services were also closed at pre-paid taxi counters inside the airport, sources said.