Agatha has been crisscrossing Garo hills after her candidature was announced 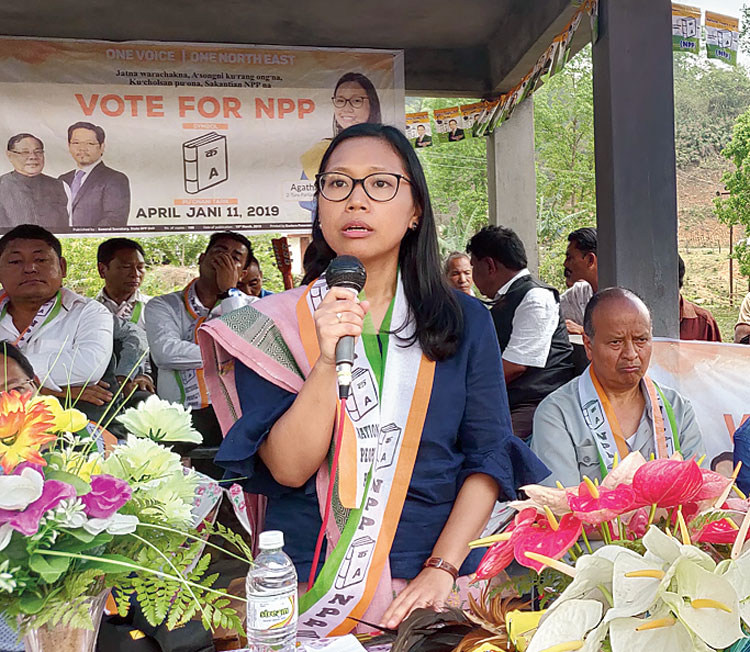 Former Union minister Agatha K. Sangma has asserted that her election campaign was not a “one-man show” but a team effort in her bid to win a third parliamentary poll.

The daughter of former Lok Sabha Speaker Purno Agitok Sangma, Agatha has been crisscrossing Garo hills for the past few weeks after her name was announced as the National People’s Party (NPP) candidate for the Tura parliamentary constituency.

Amidst her busy schedule, Agatha, 38, who holds a masters degree in environmental management from the University of Nottingham, spoke to The Telegraph on some issues raised by her opponents.

Her main rival, former chief minister Mukul M. Sangma, had alleged that Agatha, during her last term as an MP from 2009 to 2014, had performed miserably. According to records collected by the PRS Legislative Research, he said Agatha’s attendance in Parliament was only 49 per cent while the number of debates she participated in was nil. Agatha, who was a minister of state from 2009 to 2012, did not ask even a single question.

“What was Agatha Sangma doing as an elected MP of Tura if not speaking for the people who have given their votes to her? Is this why the people of Garo hills elected her? To have a vacation in New Delhi? People need to see the facts and not believe in promises and lies,” Mukul had said.

The former chief minister who was at the helm for eight years, had also said, “We have sent an MP from only one family for decades, and they think its their personal property. They were given many chances to prove themselves and bring development to the region, but they have failed miserably.”

She said when she was a minister of state for rural development, she ensured that all development schemes reached Meghalaya on time. “I worked hard for our state to progress on the total sanitation campaign.”

However, she said having an Opposition party ruling the state does not help because often there was poor coordination. “Since there is an NPP-led government in our state now, I am confident we can work together in the best interest of our state,” she said.

When she was a Union minister during the UPA-II government, the Congress was ruling the state and Mukul was chief minister.

On the Opposition charge that she was a spare tyre of the NPP, she said, “I am willing to do whatever it takes for the welfare of the people of Garo hills.”

To a query on her campaign, she said, “Ensuring victory in elections always comes from hard work and the love people have for you. No matter who your opponent is, one always has to work hard and be authentic. I believe that everyone supporting me is working very hard and we have the love of the people and their blessings.”

She also asserted that her campaign was “not a one-man show”. “I am so blessed to be a part of this team that is working day and night to transform the lives of the people for the better,” she added.

Agatha, who had also served as South Tura MLA for a brief time, said social media has now become a very important part of campaigns.

She said quality education, improving employment opportunities, infrastructure development, and protection of the environment will be her priorities. “We must work for the welfare of the people and work to build a sustainable world,” Agatha said, as she retired for the day and to prepare for another campaign in the morning.