After citizen bill flop, Conrad returns to a hero's welcome

The unity of the Northeast proved a strong force in stopping the bill from being tabled, Meghalaya's chief minister says 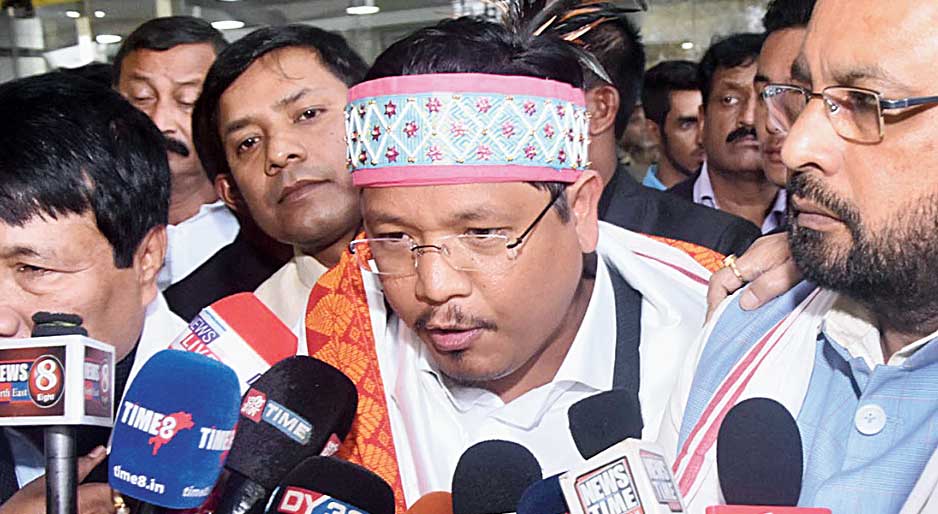 Meghalaya chief minister Conrad K. Sangma was accorded a hero’s welcome, along with AGP leaders, at the Guwahati airport here on Thursday for his role in stalling the tabling of the Citizenship (Amendment) Bill, 2019, in the Rajya Sabha.

Conrad, who is also the president of National People’s Party, said the unity of the Northeast proved a strong force in stopping the bill from being tabled on Wednesday.

“It was an emotional moment for us as so many political parties from different states came together. We sat together and voiced our opposition to the bill. Student organisations, NGOs and civil society groups also came together to oppose the bill. It was the unity of the people of the Northeast that helped us. This message of Northeast unity has gone to the nation,” Conrad told reporters at LGBI airport here. He thanked parties across the country for supporting the cause.

The bill aims to provide citizenship to non-Muslim persecuted migrants from Afghanistan, Bangladesh and Pakistan who entered India till December 31, 2014. It is set to lapse on June 3.

Conrad, who took the lead in uniting political parties in the Northeast against the bill, is being hailed for his efforts.

From the North East Students Organisation (Neos), the apex students’ organisation of the Northeast, to the AGP, which severed ties with the BJP over the bill, everyone appreciated Conrad for leading from the front.

“We are grateful to Conrad Sangma for being a true leader and for leading from the front. He took a strong and very positive stand for the well-being of the indigenous people of the region,” said Neso adviser Samujjal Kumar Bhattacharjya.

The movement got reinforced when Conrad convened a meeting of 10 regional parties, including six constituents of North East Democratic Alliance (Neda), a BJP-led political platform of non-Congress parties in the region, and the Janata Dal United here in January.