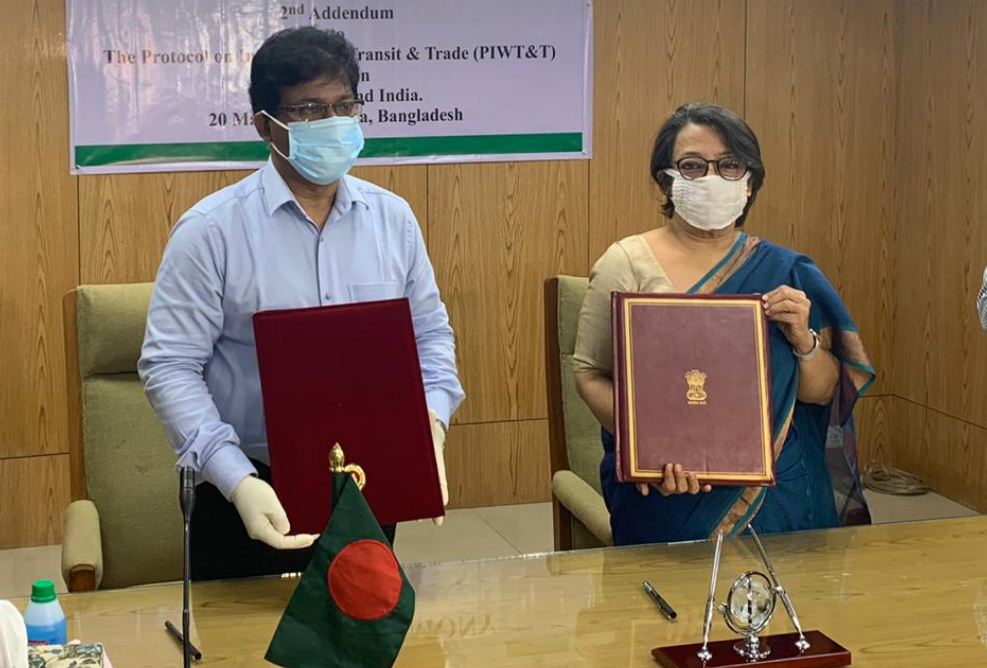 The Sonamura-Daudkandi route on the Gomati river in Tripura and the Rajshahi-Dhulian-Rajshahi route were added to the list of Indo-Bangladesh Protocol (IBP) routes, along with four new routes, during an event at Dhaka on Wednesday.

This protocol on transit and trade through inland waterways, which was first signed in 1972, immediately after the independence of Bangladesh, is a reflection of shared history, trusted friendship and mutually beneficial partnership between the two countries.

It was renewed in 2015 for five years with a provision of automatic renewal for another five years, giving long-term assurance to various stakeholders.

The protocol revision also approved five new ports of call on each side, Dhulian, Maia, Kolaghat, Sonamura and Jogigopha in India and Rajshahi, Sultanganj, Chilmari, Daudkandi and Bahadurabad in Bangladesh. Two more extended ports of call were also included at Tribeni (West Bengal), Badarpur (Assam) in India and Ghorasal and Muktarpur in Bangladesh.

Tripura chief minister Biplab Kumar Deb tweeted: “On behalf of the people of Tripura I thank @PMOIndia Shri @narendramodiji & Bangladesh PM Sheikh Hasina for approving the Sonamura-Daudkhandi route as an Indo-Bangladesh protocol route. This route will boost State’s economy and Tripura will emerge as the gateway of Northeast.”

Later, a statement from the chief minister’s office said this protocol route will strengthen bilateral trade, boost the state’s economy and help Tripura emerge as the “gateway to the Northeast”.

The statement said the “landmark decision” came six days after Deb wrote to Prime Minister Narendra Modi and interacted with him on May 14 on the issue via video-conferencing.

“The protocol route will improve the connectivity of Tripura and adjoining states with Bangladesh’s economic centres and will help the hinterland of both the countries to a great extent and also boost the bilateral trade between both countries. This route will connect all existing IBP routes,” it said.

Under the current protocol, there are six ports of call each in India and Bangladesh. These are Calcutta, Haldia, Karimganj, Pandu, Shilghat and Dhubri in India and Narayanganj, Khulna, Mongla, Sirajganj, Ashuganj and Pangaon in Bangladesh.

According to the revised protocol, a 93km stretch of the Gomati in Tripura’s Sipahijala district, connecting Sonamura in India and Daudkandi in Bangladesh and the Rajshahi-Dhulian route will be in effect.