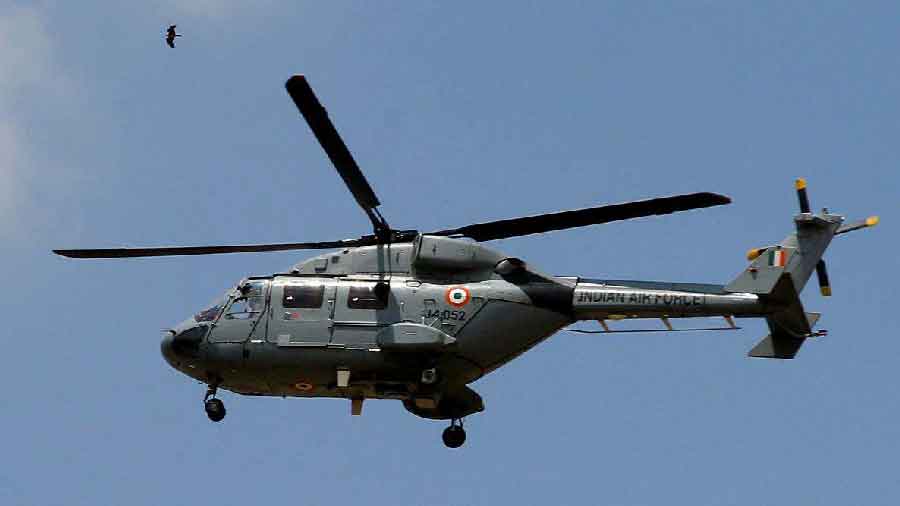 An army chopper with five personnel on board crashed during a routine sortie in Arunachal Pradesh on Friday, the second such crash in the frontier state this month.

Four bodies have been recovered by the search and rescue team and the cause of the crash “at this stage is not known”, the army said in a statement in the evening.

Tezpur-based defence public relations officer, Lt Col A.S. Walia, said the advanced light helicopter that took off from Likabali in the morning crashed at Migging (south of Tuting) in Upper Siang district around 10.40 am.

He later told The Telegraph that five persons were on board and search and rescue operations involving one MI17 and two ALH choppers had been launched to look for them in a difficult mountainous terrain.

Police personnel rushed to the site along with locals.

An #IndianArmy chopper #crashed in the #UpperSiang district on Friday. Details are awaited. This is the second crash within a month. pic.twitter.com/0PBWin6f13

The area where the crash took place is around 60km from the Indo-China border and about 25km from Tuting. China lies to the north of Upper Siang district.

Arunachal Pradesh chief minister Pema Khandu tweeted: “Shocked to hear about the news of @adgpiAdvanced Light Combat Helicopter crash near Tuting area in Upper Siang district of Arunachal Pradesh. The State Government has rushed the rescue team to the accident site and providing all assistance.”

This is the second such incident in the state since October 5 when a Cheetah chopper of the army crashed during a routine sortie in Jemeithang circle of Tawang district, also bordering China.

One of the two pilots on board died in the mishap, which took place 15km from the China border.