Though a post-mortem report will be submitted after three days, vets, conservationists and officials are more than sure that lightning was the cause of death 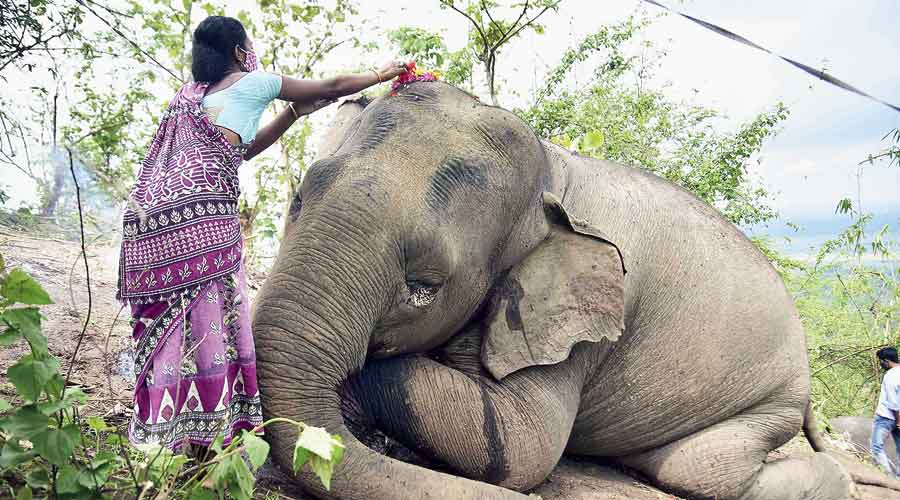 Conservationists and forest officials on Friday said the death of 18 elephants attributed to a bolt of lightning in Assam’s Nagaon district on Wednesday night was perhaps the first time that so many of them have been felled in such an incident in the world.

A group of 10 experts, including vets and pathologists, carried out the post-mortem of the elephants on Friday morning in the presence of senior officials and forest minister Parimal Suklabaidya. Though the post-mortem report will be submitted after three days, vets, conservationists and officials The Telegraph spoke to are more than sure that lightning was the cause of death.

Though the officials would wait for the post-mortem report before making public the cause of death, Kaushik Barua, chairman of the Assam Elephant Foundation, said he was cent per cent sure that the elephants died due to a bolt of lightning.

“Though we were also thinking of causes like poisoning, talking to the vets on the ground and with other domain experts, I am sure they died by a bolt of lightning. The area is lightning-prone,” he said.

Barua said even world renowned veterinarian Markus Hofmeyer of South Africa after going through the visuals from the site and ground reports has attributed the deaths to lightning.

“It is also the first time so many elephants have died due to a bolt of lightning in a single incident anywhere in the world. Elephants have been killed by lightning in Pattaya (Thailand), Sri Lanka, Bengal and Kerala but the toll has been five or below,” he said.

The “tragedy” has once again put the spotlight on Assam’s dwindling forest cover.

Experts believe the elephants took the full brunt of lightning because of sparse vegetation in the area.

“It is a natural event which cannot be stopped but maybe we can try to minimise the fatalities by conducting an intensive and urgent afforestation drive in the area and other animal corridors. The place where they were found dead — on a hillock — has very sparse vegetation or forest cover going by the visuals,” Barua said.

Chief wildlife warden M.K. Yadava, who was part of the inspection team, also said that habitat improvement always helps but first the forest department will go through all the reports, including cause of death, and then decide on the future course of action.

Since 2009, the Northeast has lost 3,199sqkm of forest area, according to the India State of Forest Report 2019, one of the reasons why human-animal conflict is on the rise in Assam.

“It was a 2km one-way steep trek to the site which has very thin vegetation. There is no forest cover in the vicinity. This angle has to be looked into if we have to prevent a repeat. The affected herd had 40 elephants and rarely disturbed the local populace. It is very sad and tragic,” a young man told TV reporters at the site, his voice choking. He has been tracking the herd for sometime.

The government had on Thursday night instituted an inquiry committee to probe the elephant deaths.

Deputy conservator of forests K.K. Deori, who is the investigating officer, visited the site on Friday morning along with a team of around 10 vets.

“The IO is allowed to undertake detailed investigation of local site, including water and salt lick quality, and may engage experts and agencies for the purpose, and carry out detailed fact-finding from fringe communities and first informants,” the official order said.

The order issued by Yadava also said the team of vets has been asked to carry out detailed post-mortem of the elephants, including collection and examination of samples for all relevant investigations, in order to establish the actual cause of death.

“Visited the elephants’ death incident spot near Bamuni Pahar, Nagaon to assess on-the-spot scenario and pay my tributes to the Nature’s precious assets today. An enquiry committee headed by an AFS Officer & a team of veterinarians has been instituted,” Suklabaidya tweeted.

He added that the detailed investigation report which will be prepared within 15 days will unravel the exact reason behind their “tragic” death.