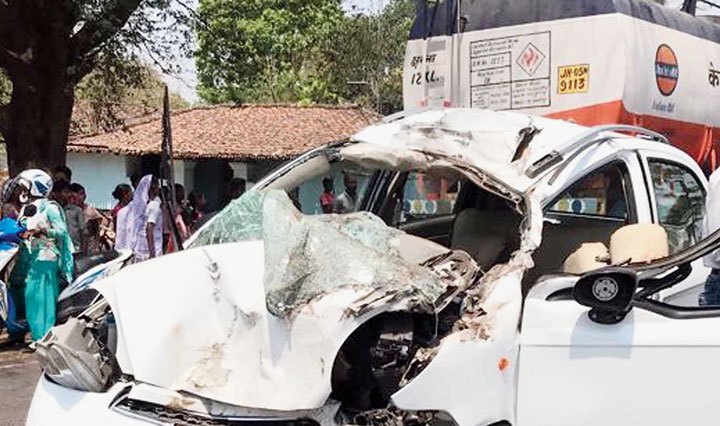 Two persons were killed and as many injured after two cars collided head-on at Telai village on Tata-Hata-Chaibasa Road under Rajnagar police station in Seraikela-Kharsawan, about 30km from here, late on Wednesday night.

The deceased were identified as Sujeet Kumar Bose, 50, a resident of Chaibasa in West Singhbhum and Shankar Namta, 52, a resident of Bagunhatu in Baridih.

Drivers of both the cars were seriously injured and are undergoing treatment at the MGM Medical College & Hospital.

Bose, a senior advocate specialising in taxation, was returning to Chaibasa along with a friend from Hathikheda temple at Patamda in East Singhbhum.

As his car was negotiating the Tata-Hata-Chaibasa state highway through Rajnagar, another car from the opposite direction collided with it at Telai village.

Both the cars were badly damaged on the impact of the collision. Rajnagar police station officer in-charge (OC) Jitendra Kumar Singh rushed to the spot shortly after the accident and rescued the injured and sent them to local primary health centre (PHC), where one of the injured, later identified as Shankar Namta, succumbed to his injury.

The PHC authority referred the others to MGM Medical College & Hospital from where Bose was shifted to Tata Main Hospital where he succumbed to his injuries.

OC Singh said both the cars were plying at a breakneck speed. The accident took place when one of the vehicles deviated from its course.

“All the injured had to remain trapped inside the ill-fated vehicles. We had to stop other cars and to arrange equipment, to dismantle the car doors and bring out the injured,” Singh told The Telegraph.

Mishaps on Tata-Hata-Chaibasa road are a regular affair at night.

A fortnight ago, three persons from Birsanagar, including two women, were killed in an accident at Rajnagar when the car they were travelling in rammed into a stationary trailer.