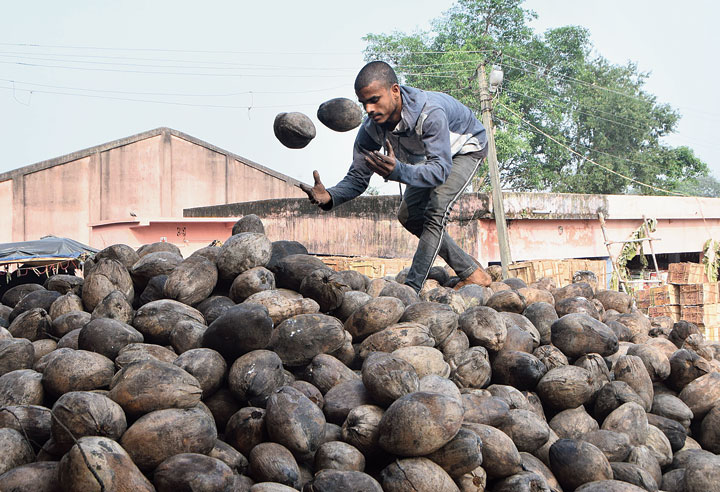 Coconuts being unloaded at a wholesale market in Dhanbad on Wednesday for sale during Chhath
Gautam Dey
Our Special Correspondent   |   Jamshedpur   |   Published 30.10.19, 07:30 PM

Sunny weather prevailed in most districts of Jharkhand on Wednesday, and the weathermen predicted that the next three to four days were likely to be rainless as there was no weather system brewing over the Bay of Bengal.

It will come as good news specially for those celebrating Chhath.

“We find no significant weather system which would impact Jharkhand’s weather in the next few days,” said S.D. Kotal, director of the Ranchi centre of the India Meteorological Department (IMD).

“Dry weather condition with mainly clear sky would prevail in most districts till November 3. Some of the districts which are located in hilly terrains might witness moderate fog and mist in the morning and nights,” he added.

Neither the IMD's Ranchi centre and nor the Patna one issued any sector-wise warning of rain or adverse weather conditions for the next five days.

The four-day Chhath, the biggest festival of Bihar and Jharkhand, starts from Thursday with Nahay Khay (ritual bathing and fasting), khairna (breaking the fast) a day after, and the main two days of sun worship, November 2 and 3, with evening and morning arghya (offering prayers to the sun god).

After the pre-Diwali washout, Chhath devotees preparing to worship the sun were happy.

“A sunny and clear weather will help in drying wheat, which is a must for Chhath pakwan (festive dishes),” said Bistupur homemaker Ragini Singh, who observes the rituals regularly. “As Chhath is a festival of purity, wheat must be washed and dried properly in the sun before being ground into flour for thekua and gujia.”

Jamshedpur, Ranchi, Dhanbad, Bokaro and several other places woke up to sunny skies and fair weather. An early morning mist and a nip in the air were also felt by people in some places.

A weather analyst at the Patna Meteorological Centre explained that the low pressure that resulted in heavy showers before Diwali had left much moisture in the atmosphere. “The moisture level has come down considerably now and this would help in ensuring clear sky and a north-westerly wind flow,” the weatherman explained.

Met statistics revealed that dry weather prevailed over Jharkhand during the last 24 hours.