Delegation from city of Daegu in Ranchi, CM plans return visit in Aug. 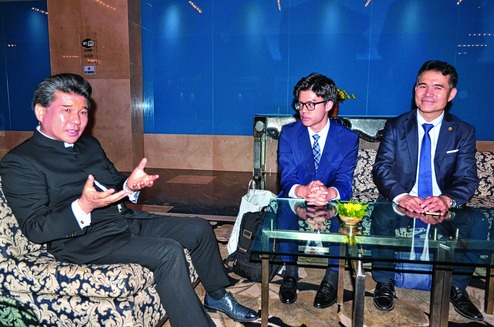 Ranchi, July 11: The principal economic adviser to the city of Daegu, South Korea, believes that Jharkhand has enough potential to attract foreign funding to boost development and the local economy, but stresses on "breaking stereotypes" to ensure success.

"When I say stereotype, I mean regular offerings to investors like reduction in taxes, speedy clearances etc. All states looking to attract investors do this. But what make the difference are intangible virtues like the urge to develop long-term friendships, seamless cooperation and bonhomie for all-round exchanges. I sensed that your CM is eager to walk these extra miles, which impressed us the most," he told The Telegraph about his meeting.

Yoon, who is also chairman of Korea-Iran Chamber of Commerce and Industry, met with chief secretary Rajbala Verma this afternoon.

Jharkhand, he said, had immense natural resources and manpower, but was devoid of financial support to progress rapidly.

"Also, the structure of the state has been such that it is only limited to selling raw material outside the state. As a result, it continues to remain devoid of actual benefits, like creating jobs etc. Therefore, our focus now is to work with the state government on charting out ways to attract investment and create feasible conditions," he added.

To begin with, Yoon said they would create a common community forum comprising India, Japan and Korea with Jharkhand as the key driver to work on common causes.

"The CM has readily agreed to this platform, which will help regular exchange of ideas, business promotion, talks and discussions on problems and solutions for speedy action," he said, adding that slowly, more states and countries with common goals would be roped in.

"The dates will be finalised in a day or two," he said.

On what Jharkhand was expecting from the visit, Barnwal said that they were looking at key sectors like automobile, textile, electronics and information technology.

"Koreans have expertise in automobile and technology-enabled manufacturing. So, we are looking to tap those. The city of Daegu is known for textiles, so we are looking for cross-border trade pacts and projects," he explained.

A delegation from Korea that visited Ranchi during the Global Investors Summit in February had expressed its keenness to set up a Korean park. According to Barnwal, the state government had earmarked a few acres at Tupudana in Namkum block for it.

"We had shown them the area at the time to set up the park aimed at creating an ecosystem for Koreans by establishing facilities tuned to their tastes like companies, food, etc. The finer points will be worked out," he said.