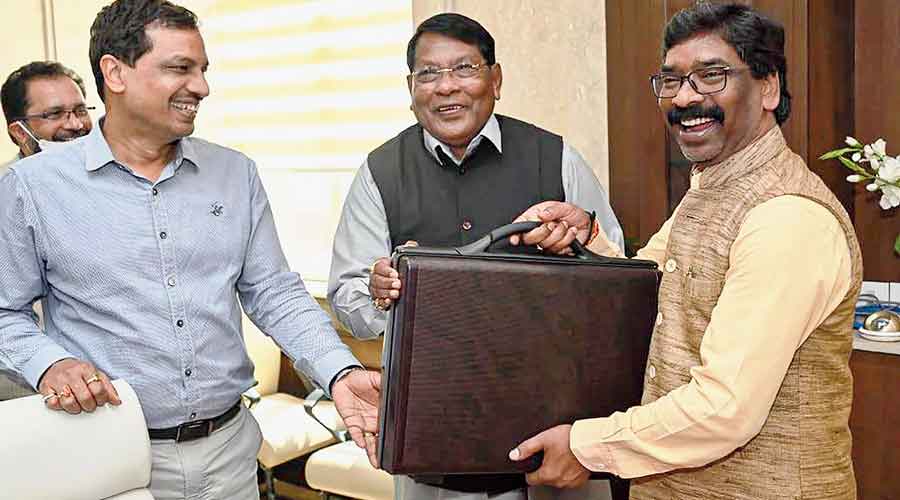 Jharkhand finance minister Rameshwar Oraon proposed no new taxes in the  state budget for 2022-23 presented in the Assembly on Thursday. He announced certain pro-people schemes.

“Besides being just an income-expenditure statement, a budget also reflects the government’s intention, dedication towards welfare of the society and willpower to execute those,” he said during the presentation of a budget of Rs 1,01,101 crore for 2022-23.

He added that the state government wanted to promote not only ease of doing business but also ease of living for the people of the state.

“We would give Rs 50,000 to each of the beneficiaries of Pradhan Mantri Awas Yojana so that they can construct an additional room to their newly built houses,” Oraon informed media persons after presenting the budget.

The government would also introduce Guruji Credit Card (named after JMM supremo Shibu Soren) for facilitating easy bank loan for students who are willing to pursue higher studies but unable to arrange guarantors, he further informed, adding they would also provide free 100 units of electricity to the poor and woollen garments to all children attending anganwadi centres.

The government would also set up a special fund, initially of 50 crore, for promoting start-ups in the state while increasing the number of Palash retail outlets for promoting sale of products by sakhi mandals or women self-help groups.

The government also planned to introduce Agri Smart Gram Yojana for overall development of 100 chosen villages by conducting gap analysis in those and plugging the gaps by convergence of various schemes.

“Though the growth rate suffered across the country due to Covid induced pandemic during 2020-21, the growth in Jharkhand’s gross state domestic product (GSDP) fell by 4.7 per cent which was less compared to the fall in growth of national GDP of 7.3 per cent,” Oraon informed the state Assembly, adding the growth rate for 2021-22 was expected to be 8.8 per cent at constant price and 14.5 per cent in current price.

While all others were busy with the budget,  a group of legislators, including a few from the ruling parties, sat outside the Assembly for sometime, donning tee-shirts with slogans written in them that demanded introduction of domicile policy and implementation of provisions of the CNT Act.