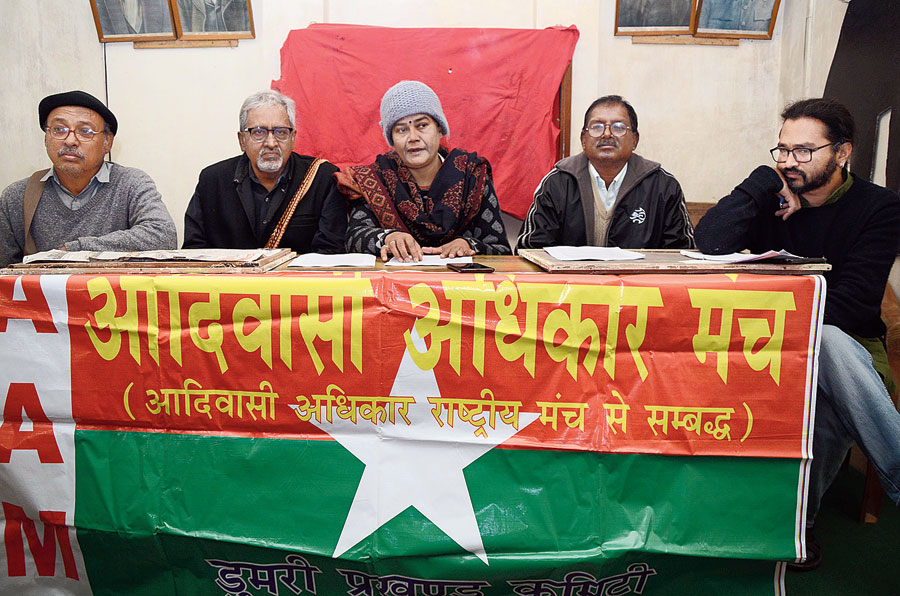 The beheading of seven residents of Burugulikera village in West Singhbhum district was due to friction between supporters of the Sati-Pati cult of Gujarat and those opposing it, a fact-finding team has found.

The report of the team corroborated The Telegraph report published on Sunday on the Gujarat link, but denied involvement of pathalgadi activists. Burgulikera residents, however, confirmed to the fact-finding team what The Telegraph had reported: That Yusuf Purty, a known pathalgadi leader, was hiding in the village some 150km south of Jamshedpur.

“In order to understand the role of pathalgadi in the killings as reported in a section of media, a fact-finding team comprising representatives of various organisations and some social activists visited the village twice, on January 27 and 30,” Aloka Kujur, a member of the team, said at a press meet here on Monday.

The fact-finding team was organised by Jharkhand Janadhikar Mahasabha, an umbrella organisation of various groups and activists and the National Alliance of People’s Movements. Some other members of the team, Siraj Dutta, Praful Linda, Vinod Kumar, Sushanto Mukherjee and Ramji Munda, were present at the press meet. On January 27, the team had 24 members when it visited the village but only a few went there for the second time on January 30, they said.

The influence of the AC Kutumb Parivar, also known as Sati-Pati cult, that originated in Gujarat and asked villagers to undertake behavioural changes to adopt a “real Adivasi lifestyle”, was growing in the area over the past one year or so, the team members said. A huge Vishwa Adivasi Shanti Sammelan was also organised by the followers of this cult at Gutibera village of Muthu block in Khunti district in October 2019 where tribals were told not to consume non-vegetarian food, not attend church, and wear white clothes, they said. The Sammelan also urged followers to give up government benefit schemes and surrender voter IDs, Aadhaar cards, ration cards and even khatiyan (land-related documents).

Around 100 of the 180 families of Burugulikera, a predominantly Munda Christian village, became followers of this cult while the rest opposed it and that caused a rift between the two groups of villagers, the fact-finding team said.

“Pathalgadi movement was a struggle for ensuring the constitutional and legal rights and opposing exploitation of the tribals and had nothing like this cult,” said Ramji Munda of Khunti, who was also a member of the fact finding team.

He said that the pathalgadi movement and the cult should not be mixed up.

The family members of those accused of the killings said there was never any discussion on pathalgadi, the fact-finding team said, adding the villagers’ discussions mostly revolved around how their land could be protected and how they could live the life of “real Adivasis”.

The pathalgadi movement in 2017-18 had tweaked the Munda tribal custom of erecting stone slabs, and asserted their special rights that the Constitution guarantees.

According to the team, those who didn't follow the Sati-Pati cult — including the family of deputy pradhan James Burh who was among those killed — observed Maghe Parab on January 15. The next day, some of them including James went to where Ransi lived and demanded to know why they didn't celebrate it and ransacked some houses. Some armed PLFI members were also present there, the fact-finding team claimed.

On January 19, cult supporters (Ransi and others) called the attackers (James and his group) for a discussion and the decision of punishing them was taken at that meeting, the team found.

“It’s difficult to know what exactly triggered the problem that day but difference over availing of government schemes was certainly a main issue,” said Siraj Dutta who visited the village twice.