The gang, headed by notorious criminals Jalla Firoz and Mohammed Kalim, were planning to murder major industrialists and politicians after lockdown 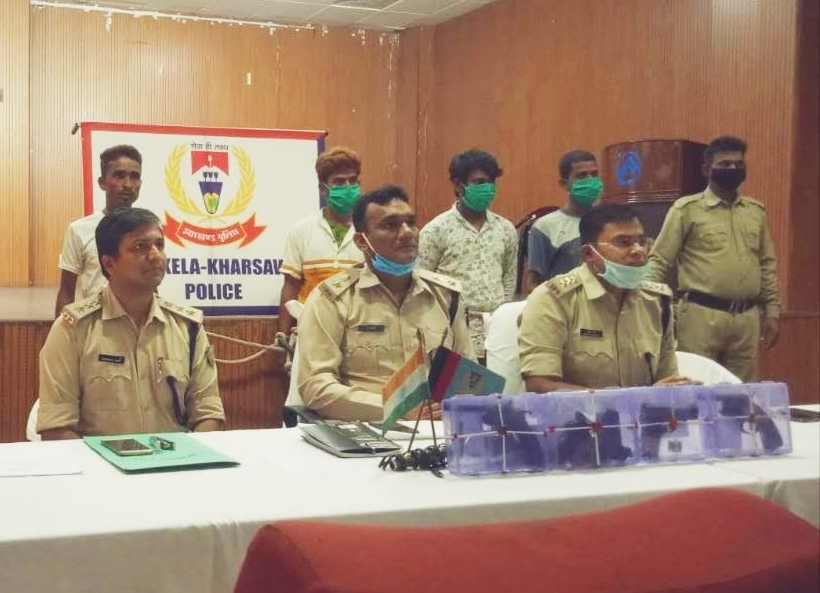 In what has proven to be a major breakthrough, police busted a gang of inter-state criminals on Saturday.

Three men were apprehended and four fire-arms, along with ammunition, seized from the adjoining Seraikela-Kharsawan district. Two key members of the gang were nabbed about 10 days ago.

According to the police, the gang was planning to murder either of a proniment businessman or a politician at Adityapur post-lockdown. This was intended to instill terror among industrialists and traders in the Adityapur industrial area, and eventually establish an extortion racket.

The five arrested were identified as Mohammed Kalim, Jalla Firoz, Mohammed Danish, Mohammed Irsad and Mohammed Irfarn, all aged between 25-40 years. While Danish is a resident of Jugsalai, Irfan is from Aurangabad district of Bihar and the rest three – Firoz, Kalim and Irsad – are residents of Kapali near Mango.

Seraikela-Kharsawan district superintendent of police Mohammed Arshi said the police received a tip-off a fortnight ago that Kalim and Jalla Firoz, who were running separate gangs, were in the process of setting up a kind crime syndicate, after merging the two gangs sometime in March..

'Having got the tip-off, we beefed up police machineries for tracing the criminals in question, in the middle of carrying out lockdown-related services. Incidentally, we nabbed Kalim and Firoz together while they were coming toward Adityapur on a bike. On frisking the duo, a police party recovered two loaded automatic pistols from their possession. We interrogated them before making the second set of arrests,' Arshi said while addressing a press conference at Adityapur on Saturday.

'Firoz (40) was wanted in connection with over a dozen criminal cases like extortion, loot and dacoity in West Bengal alone. A year ago, a team of police from West Bengal had spent almost a month tracing Firoz in the Seraikela-Kharsawan district. Besides, he is wanted in several criminal cases pending in Odisha. We have intimated the police in West Bengal as well as Odisha about the arrest of Jalla Firoz,' the senior police officer said.

According to the SP, Kalim is equally notorious and is wanted with his gang member in cases like murder, extortion, loot, dacoity and rape in and around the Seraikela-Kharsawan district.

He also revealed that at least three more criminals associated with Firoz and Kalim’s gang managed to closely escape arrest. The police are trying to find out about their whereabouts.

Arshi further informed that the arrested gang members have divulged the names of traders and politicians on their hit list. It has been decided to recommend all to be processed under the Crime control Act (CCA), ensuring they remain in prison for at least one year.

The SP also said that in praise of commendable team work, he has decided to pay Rs 25,000 as reward to the whole team beside recommending their names for commendation certificates from the director general of police, Jharkhand.