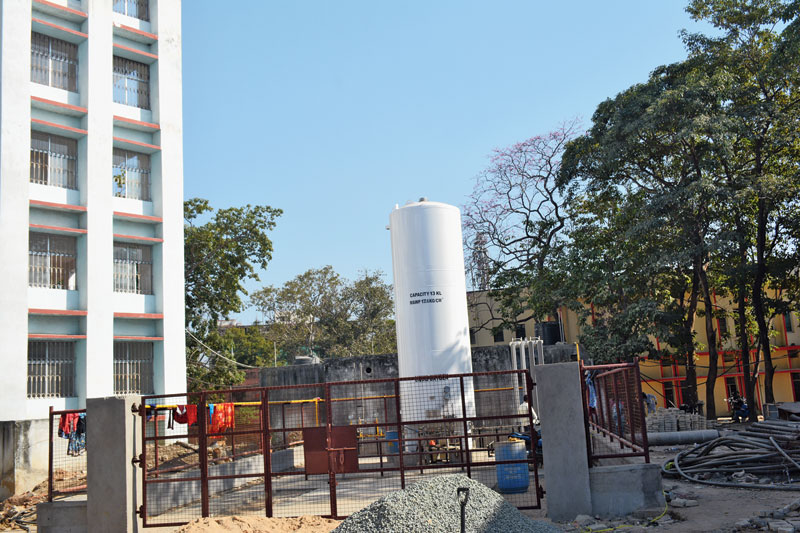 The new liquid oxygen plant on the premises of MGM Medical College and Hospital on Monday.
Picture by Bhola Prasad
Our Special Correspondent   |   Jamshedpur   |   Published 17.02.20, 07:02 PM

State-run MGM Medical College and Hospital in Sakchi here will soon start piped oxygen supply, something that will ensure 24/7 relief to scores of serious patients who will not have to fear oxygen cylinders being exhausted.

With this, the 560-bed MGM hospital will become the second government hospital in Jharkhand after RIMS in Ranchi to have the facility of piped oxygen supply.

The government hospital has roped in Praxair India to install a liquid oxygen plant with a capacity of 1 lakh litre.

The project entails an investment of Rs 5 crore. The state health department gave the fund to the hospital, the largest government-run facility in Kolhan.

Deputy superintendent of the hospital Nakul Chaudhary told The Telegraph that the work to install the plant and pipelines in the entire hospital had been completed.

“We are now waiting for the approval from the Petroleum and Explosives Safety Organisation (PESO), under the the Union government. The piped gas supply will begin soon after we get the mandatory approval,” Chaudhary said.

He explained that the hospital would get the gas in the form of liquid oxygen. The most convenient and economical way to store oxygen in bulk is in liquid form. It is then evaporated into a concentrated oxygen supply for medical use, the deputy superindent said.

Patients and their kin welcomed the facility.