In the past 5 years, the state experienced 'constant attacks' on people’s rights and basic tenets of democracy 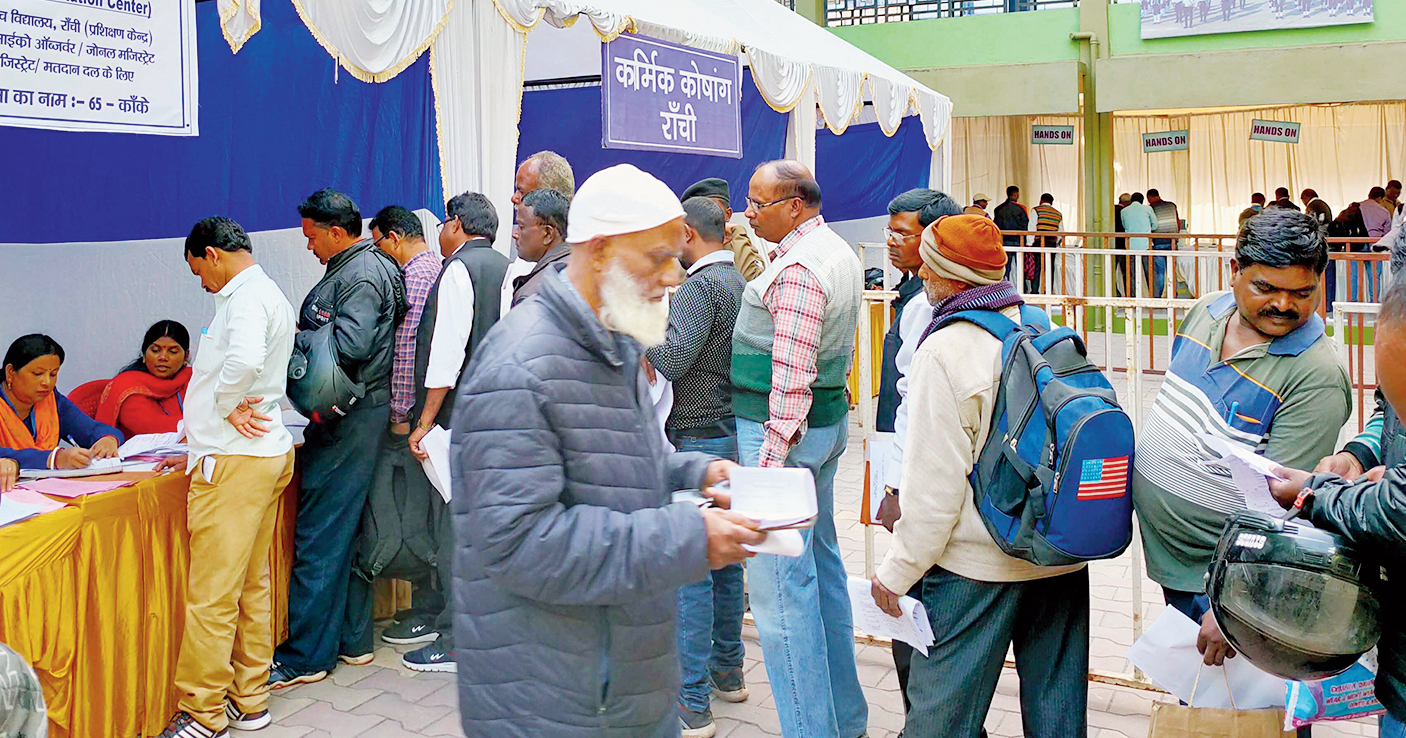 Government employees, who will double up as polling officials during the second phase of the Assembly elections on December 7, stand in queue to cast their votes at St Johns School in Ranchi on Monday. Election officials cast their votes before the regular electorate.
Picture by Manob Chowdhury
Achintya Ganguly   |   Ranchi   |   Published 02.12.19, 09:23 PM

Major political parties have ignored or paid lip service to the biggest problems of the state, the Jharkhand Janadhikar Mahasabha, a coalition of progressive organisations, said on Monday.

In the past five years, the state experienced “constant attacks” on people’s rights and basic tenets of democracy, the Mahasabha said, citing attempts to amend the Chhotanagpur Tenancy Act and Santhal Pargana Tenancy Act. The Mahasabha also pointed to the amendment in the land acquisition law, setting up of land bank, starvation deaths, lynching, atrocities on Adivasis, Dalits, Muslims and women, communalism, attacks on the freedom of expression, subversion of traditional self-governance systems of the tribals.

The BJP ignoring these issues was not surprising, it said, but most of the Opposition parties also didn’t enough attention. The Mahasabha compared the manifestos to drive home the point.

The BJP manifesto, it said, “reflected the party’s arrogance and continuing denial of severe violations of people’s rights over the last five years. The inclusion of implementation of NRC (National register of Citizens) in its manifesto exposes its communal and anti-poor ideology”.

The Ajsu Party also ignored the demands with a few exceptions such as implementation of the Forest Rights Act, a law against mob lynching, and quota for backwards castes, the Mahasbha said. Despite people’s opposition to land bank, none of the parties committed to repeal the policy, it alleged.

The declaration by Congress to cancel projects such as the Adani power plant and Mandal and Icha Kharkai dams was a welcome move, the statement said, adding that the JMM only talked about reviewing those and the JVM was silent on these projects.

Implementation of provisions of the Fifth Schedule of the Constitution in letter and spirit had been a key demand of the tribals, the statement reminded, adding that none of the parties barring the JVM had committed to this.

Regarding the demand to formulate a new domicile policy favouring Jharkhandis, the Opposition parties offered vague commitments, the Mahasabha said. To formulate a law against mob lynching, as promised by all Opposition parties, was a welcome move “but none of them committed to repealing the draconian bovine slaughter prohibition law that was used to victimise some of the surviving victims of lynching incidents under the watch of the BJP government,” the Mahasabha alleged.

Even the Opposition parties have not adequately addressed the issues of hunger, under-nutrition and denial of welfare entitlements, the Mahasabha statement said. Only the Congress promised to increase the monthly public distribution system (PDS) grain entitlement to 35kg per family and to also include pulses.

None of the parties has committed to increase the coverage of the PDS or social security pensions, it added.

Though Jharkhand has amongst the highest levels of under-nutrition in the country, no party has talked about increasing the number of eggs in meals given to children in schools or anganwadi centres, it further said. “Aadhaar created havoc in welfare programmes in the state but none of the parties committed to delink Aadhaar,” the statement said.

None of the parties has committed firmly to closure of sedition charges in in pathalgadi villages, removal of police camps and taking security personnel to task, it added.

“It is worrying that in this election season, political parties are more interested in securing defection of candidates from other parties, than finding solutions for or addressing people’s demands,” the Mahasabha said.

Even the commitments made by Opposition parties in their manifestos are yet to be reflected in their campaigns across the state, it said. The BJP, unable to run away from its failures, is raking up Ram Mandir and Article 370 talks in its attempt to polarise the voters, it added.

“This election crucial for protecting democracy and constitutional values,” said Mahasabha member Siraj Dutta, explaining why they issued the statement.