Advertisement
Home / Jharkhand / Over 3000 fish die of filth in dam

Around 30 quintal of adult fish were found dead at Getalsud dam, some 30km away from capital limits in Angara block on Saturday, the needle of suspicion falling on industrial units in close proximity to the dam. 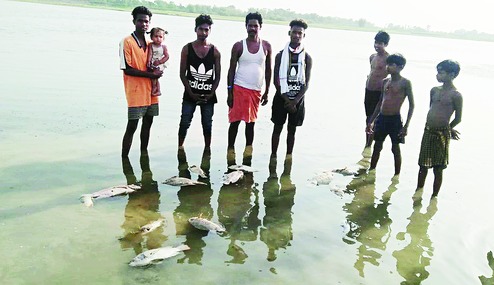 Ranchi: Around 30 quintal of adult fish were found dead at Getalsud dam, some 30km away from capital limits in Angara block on Saturday, the needle of suspicion falling on industrial units in close proximity to the dam.

Fishermen, who informed the state fisheries department of the occurrence, alleged any one of the industries nearby had released untreated effluents in the dam.

Speaking to this paper, Bhola Mahto, secretary of Getalsud Matsya Sahog Samiti Limited, a cooperative of local fishermen who are patronised by state fisheries department, said they had spotted thousands of adult fish carcasses floating on the water body on Saturday and in lesser numbers on Friday.

"Yesterday (Friday), we spotted some, but today (Saturday) it was no less than 3,000 kilos (30 quintal) of dead fish floating downstream at Getalsud's Angara side. I'd say each fish would weigh between 1 and 1.5kilo. Something is drastically wrong," he said.

Mahto added, "There are quite a few companies (industrial units) on other side of the dam. Someone must have silently discharged their chemicals/untreated wastes into Getalsud waters. The incident requires deep probe and strict punitive action," he demanded, adding that they had informed officials of state fisheries department on Saturday morning itself requesting immediate spot inspections.

Mahto said their samiti alone had around 100 fishermen as members. Directly and indirectly close to 5,000 people are dependent on fishing at Getalsud as their lone source of livelihood. "Very few families have land here. Most people fish. So, if the dam water gets polluted and fish die, our families go hungry. Water pollution directly hits our stomachs," he stressed.

Ashish Kumar, deputy director of state fisheries department, confirmed having received the information from fishermen. He said, "I am not exactly sure which company polluted the dam but this is cause for serious concern. We shall soon send a team for inspection and alert pollution board officials."

Member secretary of Jharkhand State Pollution Control Board Rajiv Lochan Bakshi said they would take strict action against erring companies if any was found guilty of polluting the water body.

"I haven't officially received any complaint but let me assure you that we are highly sensitive towards water pollution in Getalsud dam. We want industries to follow a policy of zero discharge of untreated water. In the past too we had closed down few firms found guilty of polluting the dam. We will inspect the industries and will close down the unit or units till they establish functional effluent treatment plans," he said.

On the eve of World Environment Day, June 5, fish had died in droves at Ranchi Lake or Bada Talab, with conservationists blaming pollution.

Ravindra Kumar Sinha, the VC of Nalanda Open University and a noted environmentalist dubbed Dolphin Man who was in Ranchi then, had told the paper that severe water pollution led to fish deaths. "The required DO level for fish to survive is 5ml per litre. Though some species can survive low oxygen levels, usually fish die when pollution depletes required oxygen," he had said.