Families complain to MLA, Chennai company says some left on their own 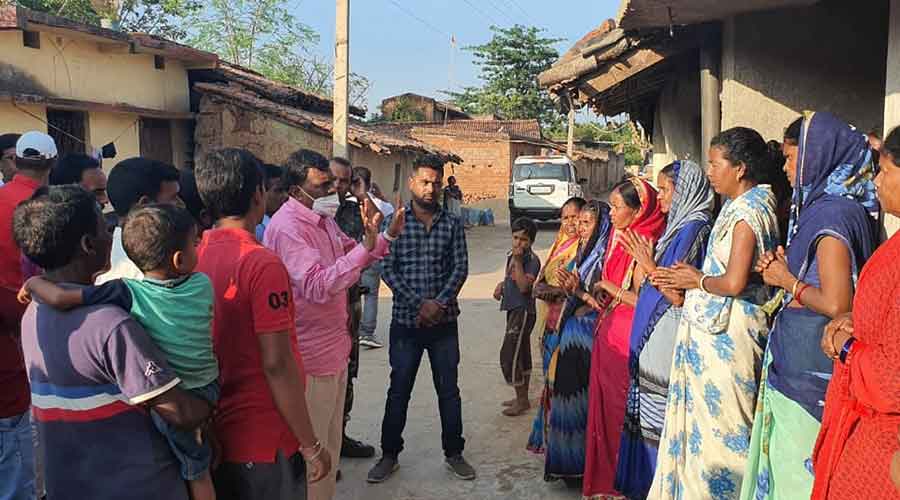 Gomia MLA Lambodar Mahto talks to family members of youths who have been allegedly held hostage by a Chennai company on Wednesday in Bokaro.
Telegraph picture
Our Correspondent   |   Bokaro   |   Published 29.10.20, 04:25 PM

Over 100 youths of a Bokaro village, who had gone to Chennai after being promised work and a good pay, have now complained that the contractor who took them there a month ago had held them hostage.

The contractor has, however, claimed that while some workers had left without informing him, others had returned and were with him on their own accord. Nevertheless, the family members of the youths have approached the MLA of Gomia, Lambodar Mahto, for help after some of the youths managed to call them and tell them about their plight.

On Wednesday, Mahto informed Bokaro deputy commissioner Rajesh Singh, who assured him of all possible help to bring back the youths of Chando village of Petarwar block.

The MLA said, “The villagers here told me that the contractor has held the youths captive and was mentally and physically torturing them. They youths have told their families about being forced to work for 12 hours. The contractor has refused to pay them the promised amount.”

Mahto said he had also spoken to the labour secretary of Jharkhand and requested his help to bring the workers back from Chennai. Family members of the youths say that many of their phones weren ow switched off.

Logesh R of Astrotech Steel, Chennai, who took the workers there, said over the phone that about 50 workers had left on Saturday without informing him, but 30 of them had returned on Tuesday. They were “happily working”, he claimed.

“We brought them to Chennai from Bokaro, spending Rs 5 lakh on buses. We got them tested for COVID-19 in Chennai and met other expenses. We have spent almost Rs 15 lakh on them but they refused to work and returned without informing us. What we can do?” he said.

During the lockdown, as many as 27,000 migrant workers returned to Bokaro while other districts also recorded a huge number of arrivals. Months later, several companies began searching for manpower to run their businesses. In September, the sub-contractor of the Chennai company came to Bokaro in search of skilled and semi-skilled workers. He got in touch with the youths of Chando and nearby villages, offering them jobs in the packaging industry. He also showed them labor licenses and other documents pertaining to the company, Astrotech Steels. The workers were offered free lodging, food and a good remuneration.

As no buses were plying then, the contractor hired two buses and took 104 workers to Chennai. But after reaching Chennai, many of them found that the nature of the job and the facilities were not as promised. The workers expressed their wish to go back but the contractor did not pay heed.

Bokaro labor superintendent Harendra Kumar Singh said, “We have informed the state control room which deals with problems of migrant workers. They will coordinate with the authorities of Tamil Nadu and help bring the workers back.”