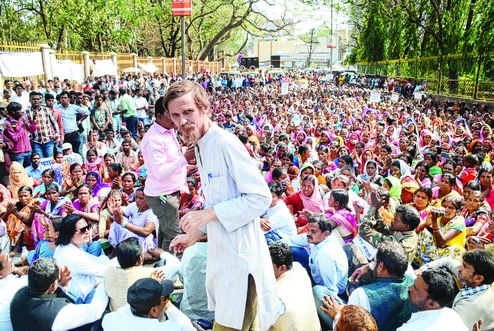 Holding such banners and posters, around 1,000 residents from 13 panchayats of Nagri on Monday undertook a 15km padyatra (rally on foot) from Kathalmore to Raj Bhavan to demand an immediate rollback of direct benefit transfer (DBT), introduced on a pilot basis in their block last October, which they claimed only introduced fresh problems for the poor in getting subsidised ration.

Under the banner of Ration Bachao Manch, a broad coalition of five Opposition parties (JMM, JVM, CPM, CPI-ML and Congress), and 10 people's organisations (Right to Food Campaign, All India People's Forum, United Mili Forum, Jharkhand Nagrik Prayas, among others), protesters were originally scheduled to gather outside the chief minister's Kanke residence but did not get police permission.

However, even outside Raj Bhavan, the protest made an impact. The loudest voices belonged to Nagri residents, mostly below poverty line red card holders, who called themselves "victims of DBT experiment", wherein the government directly deposited ration money to their bank accounts instead of PDS (ration) dealers.

Common complaints from ration beneficiaries included government money not deposited to the bank account, money getting lost in transit or going to some other bank account, real or fake, among others.

"My money goes to my Airtel account. What does it mean?" demanded Rashmi Tirkey of Nagri's Ladda, carrying her Bank of India passbook.

BPL card holder Babloo Kachchap of Sapron village claimed that for last month, he was forced buy rice at Rs 32/kg from the PDS shop, instead of the subsidised Re 1/kg. Reason? "The DBT wasn't coming to my bank, but my PDS dealer said if I did not buy ration for more than two months at a stretch, my card will be rejected," he said. Did he never get money? "Yes, last November. But, do I keep visiting the bank daily for the rest of the money or do I try to find work?" asked the casual worker.

Elderly and jobless Joseph Kerketta said he was forced to beg on the streets without subsidised ration.

MGNREGS activist Jean Drèze said it was high time the government returned to the old model of ration distribution unless it could efficiently implement bank transfers.

"The Nagri experiment is a disaster. A recent survey done by various social groups revealed 97 per cent of villagers in the block are against DBT in PDS. On an average, people spend 12 hours to go to banks or pragya kendras to withdraw their cash subsidy and then to ration shop to collect rice. Of four instalments of DBT money that are due since October 2017, beneficiaries on an average got only half," he said.

Tribal activist Dayamani Barla added that despite enough proof of problems and "a starvation-like situation", the state government was "shamelessly bragging" about DBT. "This protest is the start of our larger fight," she warned.

Former deputy mayor and senior Congress leader Ajay Nath Shahdeo demanded that Nagri experiment shouldn't be replicated anywhere else. "We hear the government is trying to fan out DBT. If this is the way, it will wreck havoc on the poor," he said.

Drèze said food minister Saryu Roy had called him on Sunday. On Tuesday, Roy is learnt to have called a high-level departmental meeting to review various aspects of food supply, such as expired salt and PDS distribution snags.