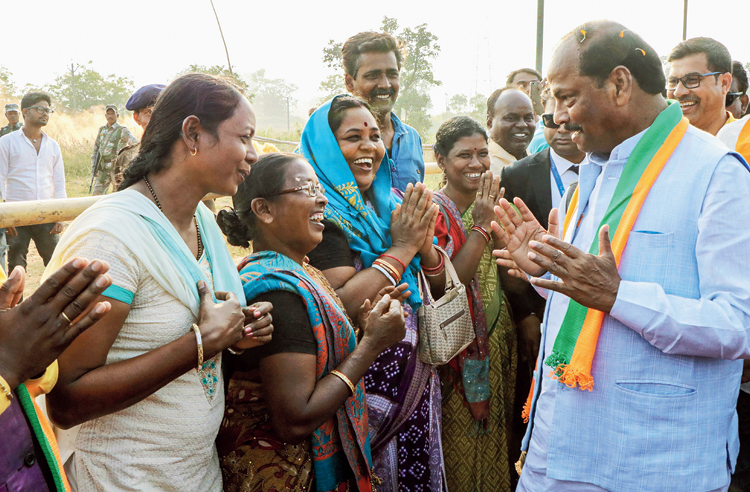 Chief ministers Raghubar Das interacts with his supporters during a campaign rally at Chakradharpur in West Singhbhum on Friday
(PTI photo)
Kumud Jenamani   |   Jamshedpur   |   Published 30.11.19, 07:59 AM

This elections, litti parties could prove to be star campaigners.

Thrown in honour of Independent candidate Saryu Roy, the Friday night litti party was Baridih Basti resident Sudhir Singh’s idea. A staunch supporter of Roy, Singh is throwing the party near his house.

Roy, last heard, was waiting to enjoy the party.

Litti, a typical dish of the people of Bihar, is enjoyed to the fullest during winters. Made of flour, gram powder and baked on earthen stove, litti is a mouth-watering-good-for-health delicacy which is enjoyed with chatni and mashed potato or brinjal.

“Me and my associates will feel privileged if Saryu Roy, who is busy campaigning, attends the party. We will have a chance to interact with him if he drops in at the party. Around 500 people will attend the party,” said Singh, adding that he has informed about the litti party to the person handling Roy’s campaign.

Another Roy supporter Mohanlal Agrawal, a resident of Birsanagar, is also throwing a litti party on Friday night.

Ratnesh Singh, in-charge of Roy’s campaign cell, said 60 residents from various areas of Jamshedpur East constituency have requested a slot for Roy to attend litti parties they are organising in honour of the former BJP leader.