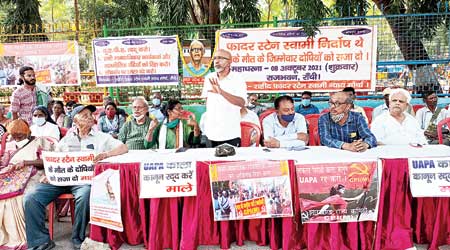 Social and right activists along with Left parties’ members sit on a dharna near Raj Bhavan in Ranchi on Friday to mark first year of Father Stan Swamy’s arrest.
Manob Chowdhary
Animesh Bisoee   |   Published 09.10.21, 12:25 AM

Protests and programmes were organised in Jharkhand, Kerala and Karnataka on Friday to mark the first anniversary of the arrest of octogenarian Jesuit priest and rights defender Father Stan Swamy who passed away in July this year in judicial custody.

Over 150 rights activists and members of civil society organisations, Left parties and tribal outfits under the banner of Shahid Father Stan Swamy Nyaya Morcha staged a dharna for over two hours at the Raj Bhavan in Ranchi. Fr Stan was arrested from Namkum near Ranchi on October 8, 2020, by the National Investigation Agency.

A delegation submitted a memorandum to governor Ramesh Bais later in the afternoon demanding a judicial probe into the “custodial killing” of Fr Stan and punishment for those responsible for his death, release other 15 arrested in the Bhima Koregaon-Elgaar Parishad case, immediate release of political prisoners lodged in prisons of Jharkhand and other parts of the country and repeal of draconian laws like the UAPA.

“We have come to know about a letter written by three prisoners — human rights lawyer Surendra Gadling and cultural activists Ramesh Gaichor and Sagar Gorkhe — who were eyewitnesses to the inhumane treatment meted out to Father Stan Swamy, to Maharashtra chief minister Uddhav Thackeray a few days back. The letter claims that Stan Swamy’s death was an institutional murder. Since Stan Swamy was based in Jharkhand, we would like the governor to ensure that a judicial probe is ordered into his custodial killing so that those responsible are punished,” said Aloka Kujur, a member of the Adivasi Adhikar Morcha and a tribal rights activist.

CPM leader and convener of the Morcha, Praful Linda, said the governor should take up the issue with the highest authorities and ensure that all political prisoners and human rights activists arrested in the Bhima Koregaon case are released along with political prisoners in other parts of the country.

Fr Stan had spent a lifetime working among the Adivasi community in Jharkhand fighting for their rights. He was arrested from Bagaicha at Namkum by the NIA in October 2020 in connection with the Bhima Koregaon case and lodged in Taloja Central Jail in Navi Mumbai. He died while undergoing treatment under judicial custody at a private hospital in Mumbai in July.

His death had led to an outpouring of outrage as the 84-year-old was repeatedly denied bail despite his deteriorating health over nine months in jail.

Filmmakers, artistes and activists of Kerala under the banner of Capture Collective organised an online awareness and protest campaign to mark the occasion.

National Dalit Movement for Justice, spoke at the webinar.

Father Stan had been associated with issues related to Scheduled Castes and Scheduled Tribes for over four decades in Jharkhand and other parts of the country.