JMM protests against SC order to evict tribals from forests 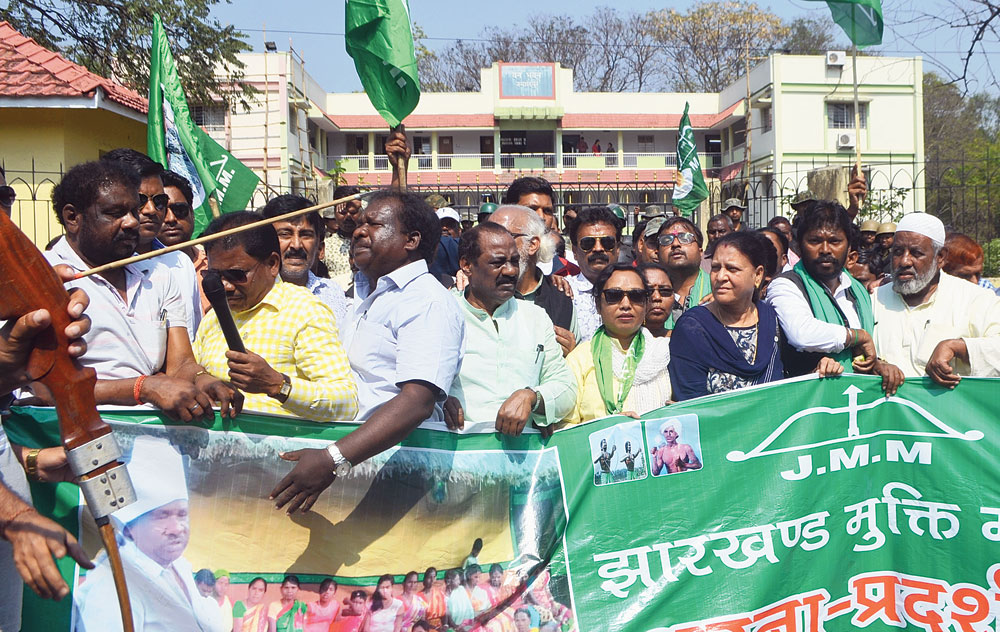 JMM workers demonstrate in front of the RCCF office in Sonari, Jamshedpur, on Monday.
Picture by Animesh Sengupta
Our Correspondent   |   Jamshedpur   |   Published 25.02.19, 06:46 PM

Over 2,000 JMM workers, led by party MLA Kunal Sarangi, held a four-hour demonstration at the office of regional chief conservator of forests (RCCF) at Sonari, demanding that the state government take immediate action to safeguard the interests of tribals who faced eviction form their traditional forest habitats in view of a recent Supreme Court order.

Sarangi, who is MLA from Baharagora, said that 30,000 tribals settled on forest land were likely to be evicted because of the Supreme Court ruling. On February 13, the apex court asked states to ensure that all those whose claims under the Forest Rights Act had been rejected should be evicted forthwith.

According to certain estimates, the ruling will affect 10 lakh tribals across the country.

The protesters, who also included women, threatened to launch a protracted agitation of tribals were made to leave their traditional forest dwellings. Later, they handed over a memorandum to the forest authorities too.

“An NGO had filed a PIL in the apex court claiming that a huge area of forest land had been encroached and occupied by tribals. It said forest land continued to be encroached upon, thereby endangering wildlife. But when the apex court heard the issue, the legal departments of the Centre and concerned states did not plead the case. As a result, the apex court ruled that all forest land should be relieved of encroachments,” said Sarangi.

JMM district president Ram Das Soren said in East Singhbhum, a large number of landless tribals had been given “ban patta”, but because of the “anti-tribal” attitude of the BJP-led Raghubar Das government, they would be rendered homeless.

The demonstration began at 11am and ended 3pm by when the delegation, led by Sarangi, handed over a memorandum to Dhalbhum divisional forest officer Abhishek Kumar.

“The memorandum was addressed to Jharkhand Governor Droupadi Murmu and handed over to the DFO, Dhalbhum,” the MLA told The Telegraph.