Jharkhand administers Corbevax for children aged between 12 and 14 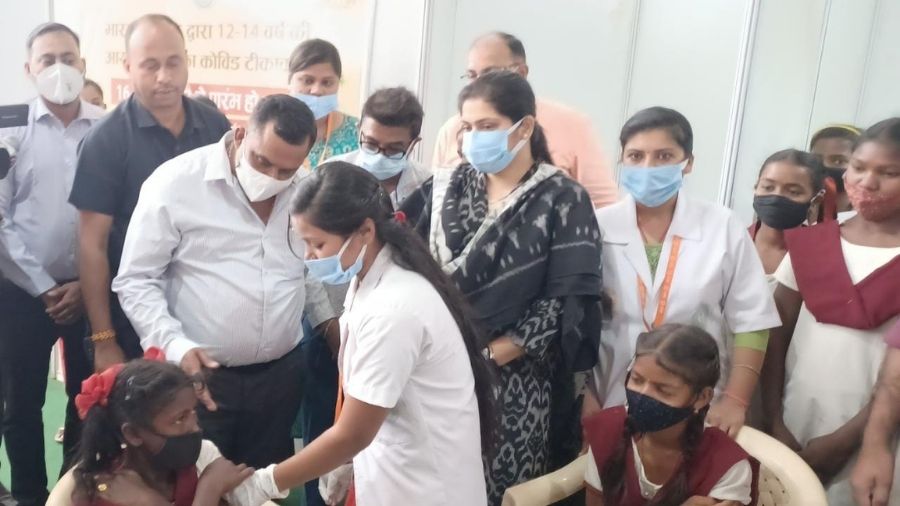 Health minister Banna Gupta (in white shirt) in Jamshedpur during the start of Covid jab on Wednesday
The Telegraph Picture
Our Correspondent   |   Ranchi   |   Published 16.03.22, 08:21 PM

Jharkhand is administering Corbevax for children between 12 and 14 years age group as covid-19 vaccination for them formally began from Wednesday.

This is part of the nationwide drive that the Union government has launched folowing approval of a gap of 28 days between two doses.

Health minister Banna Gupta formally launched the drive in Jamshedpur stating that an estimated 15.94 lakh exist across the state in this age group for vaccination. Jamshedpur has an estimated population of 1,10,843 kids in the age group of 12-14.

In Ranchi, civil surgeon Dr Vinod Kumar formally inaugurated the drive by administering vax to a kid identified as Abhigyan Kundu. Kumar informed that in Ranchi, they have an estimated 2.11 lakh people in this age group for vaccination.

“Students in this age group will be also be administered jabs by holding camps at school levels like we did for higher age group students when 15 plus vaccination began. There won’t be any problems as both schools and health officials are now experienced in conducting camps for children,” he said.

Besides Sadar hospital, two other government middle schools in Jagarnnathpur and Pandra began vaccination from on Wednesday. “Slowly, it will be fanned out as we are preparing detailed rosters for the drives,” said Kumar, adding that people can either self register through co-win portal or can get on-spot registration done at the camps.

Shamku Kumar, a 13 year old said he was excited to get vaccinated. "Now, I can go to school without fear and can also play outdoor games. Due to covid-19, our movements were completely restricted which not just affected our studies but our overall physical health too," he said.

Many districts too began the drive with limited session sites in view of the Holi festival coupled with holidays in the school. Officials however maintained that post Holi, they will intensify the drive with the help of schools.

In Hazaribag, district administration has begun holding camps at half a dozen sites comprising sadar hospital and government schools in different blocks. “We have around 83,412 kids in 12-14 years age group,” informed an official in-charge of vaccination at Sadar hospital.