Hemant to unveil new projects worth over Rs 12,000 cr on govt's 2nd anniversary

Morabadi ground decked up for function, seating arrangements made for 5,000 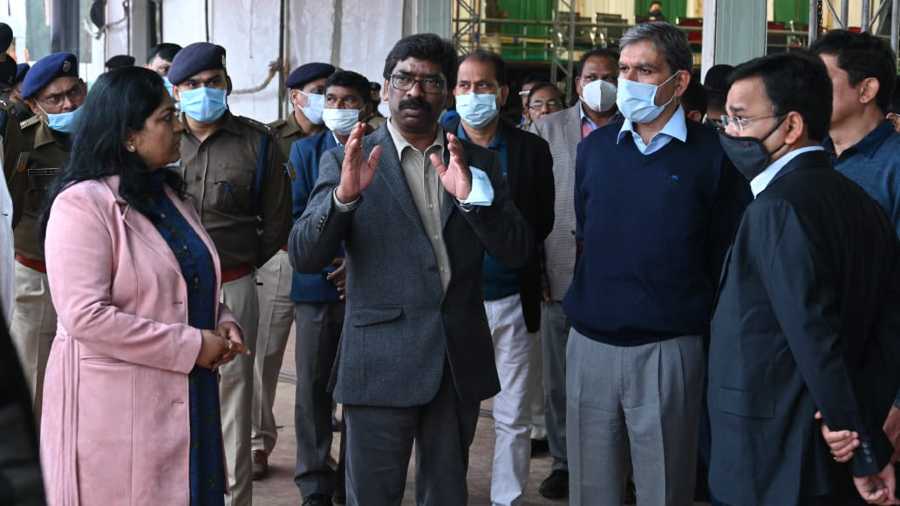 Chief minister Hemant Soren will lay the foundation stone for projects worth Rs 12,558.50 crore on Wednesday, a bulk of the spending focused on upgrading drinking water facilities, to mark the second the anniversary of the JMM-Congress-RJD alliance government.

He will also inaugurate ready projects worth Rs 3,195.30 and distribute assets to the tune of Rs 1,493 crore among beneficiaries, according to details released by the chief minister’s office.

“Projects worth Rs 8,428 crore are under the rural drinking water and sanitation department. The other focus area is road and rural development and the foundation stone will be laid for projects worth Rs 1,639 crore covering 102 roads and two bridges.Rs 1,300 crore is being spent on new rural development schemes,” an official said, adding that new projects in healthcare, urban civic amenities and creation of infrastructure for skilling through ITI institutes were also in the pipeline.

The Jamshedpur Women University which will be inaugurated on Wednesday.
Bhola Prasad

Most of the projects set to be inaugurated are new roads, amounting to Rs 1,560.61 crore. "As many as 27 roads and five new bridges are to be opened. Other projects awaiting inauguration include newly set-up drinking water facilities across districts (Rs 572 crore), school buildings/revamp under tribal welfare department (Rs 20.51 crore), construction and upgradation of  health centres (Rs 113.67), a Khadi Park in Dumka (Rs 2.10 crore) and over a dozen power sub-stations (Rs 317 crore)," he said.

Letters for government jobs in departments like agriculture, excise and industries, would be handed to 100 people.

Preparation on for the programme at the Morabadi ground in Ranchi on Tuesday.
Manob Chowdhury

A state- level function to commemorate two years of the Hemant Soren government will be held at Ranchi’s Morabadi ground from 11.45am. The venue has been decorated with giant-sized canvasses. Seating arrangements have been made for about 5,000 people.

On Tuesday evening Hemant inspected the venue with officials to oversee preparations for Wednesday's grand show. He also made it a point to direct local authorities to ensure that Covid appropriate behavior was adhered to by all visitors.