Government apathy towards their plight has stirred a row 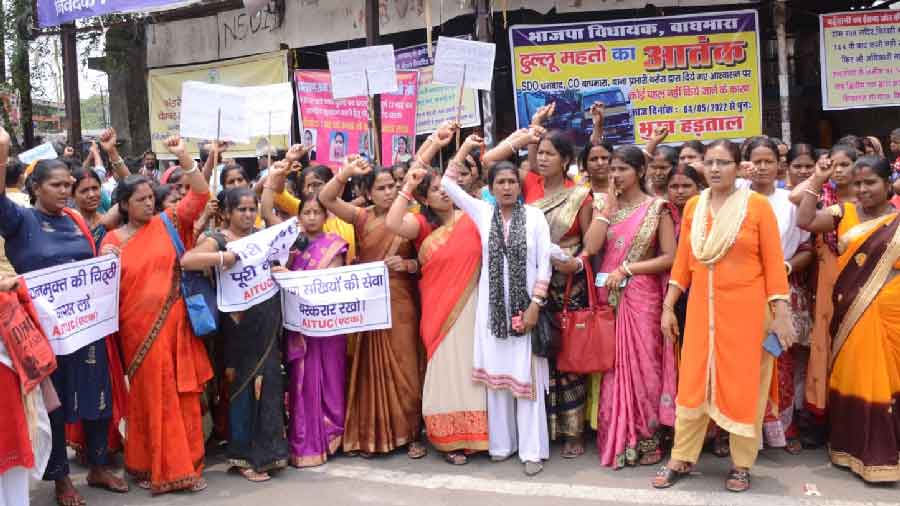 Over 100 health workers of Anganwadi centres on Thirsday launched a two day dharna at Dhanbad district headquarters against their pending salaries and retrenchment order.

The protestors comprising Poshan Sakhi of six districts of the state, including Dhanbad, Dumka, Godda, Koderma, Giridih and Chatra, who were holding banners, posters and placards bearing messages and slogans demanding revocation of their retrenchment also shouted slogans against the state government.

Talking to the media on the sidelines of the protest, Rubiya Khatoon of Gandey block of Giridih district said, “We are deprived of salary of over and year and government meanwhile has also issued retrenchment orders against us from May 1 bringing us on the road.”

She further said, “We have relentlessly served women by visiting each nook and corner for the last five even during the crucial time of pandemic risking our lives but the government has backstabbed us by issuing retrenchment orders.”

“We have been protesting against the pending salaries since February this year by coming on roads but all our demands seem to fallen on deaf ears,” added Khatoon who is also  district president of Jharkhand Rajya Ekikrit Poshan Sakhi Sangh.

Soni Paswan, state president of the Jharkhand Rajya Ekikrit Poshan Sakhi Sangh said, “On one hand the state government is promising all kinds of facilities and support to women but on the other hand it is inflicting injustices against us which shows the double standard of the  government.”

“The financial condition of the family of 10388  Poshan Sakhis who are deprived of salaries has greatly deteriorated and they are not able  to even pay the school fee of their children and failed to ensure the treatment of their ailing family members due to lack of money,” Paswan added.