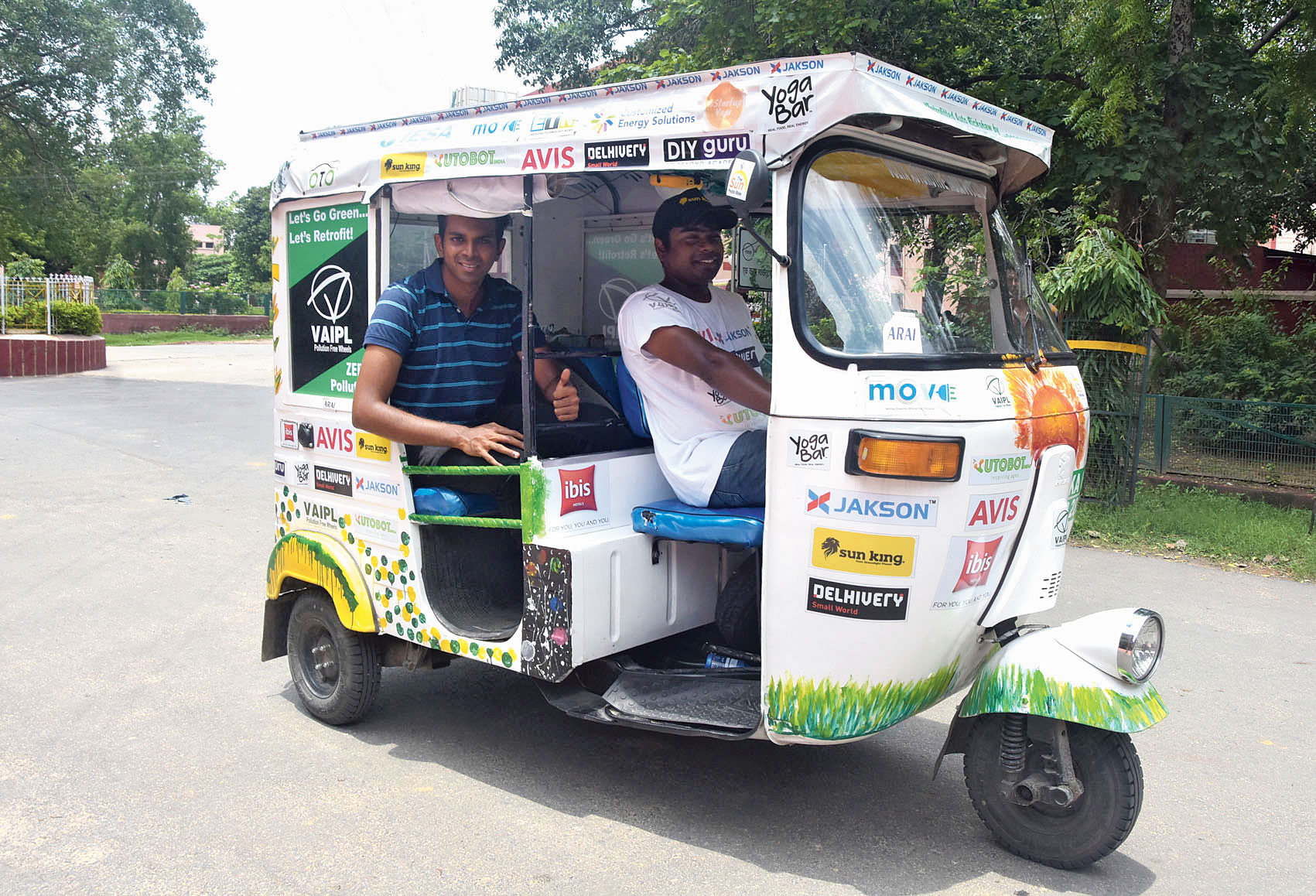 Reddy, who holds a Guinness record for travelling 7,500km on a solar-powered electric bicycle in 2016, started his current journey called Sun Pedal Ride – Golden Quadrilateral on May 25 from Bangalore and will return to the Karnataka capital on July 26 after visiting over 60 towns and cities situated on the Golden Quadrilateral. The Golden Quadrilateral is a national highway network connecting most of the major industrial, agricultural and cultural centres of India.

Besides Reddy, the team comprises Sudheer Lakkala, a BTech in computer engineering from Anna University (Chennai), Pallavi Siddhanta, a PG in mass communication from Banaras Hindu University and Ruthvik Arya, who graduated from Arizona State University with masters in software engineering in 2018.

Talking to The Telegraph at IIT(ISM) on Thursday, Reddy said: “We travel around 150km a day and reached here yesterday (Wednesday) from Bihar. We gave a small presentation in front of 80 students yesterday and drove the auto on the campus today (Thursday). We explained how we developed the solar powered electric auto-rickshaw with the help of Volta Automative India. Volta carried out retrofitting by removing the petrol engine from the traditional auto and replacing it with electric and solar kits.”

Reddy said a solar panel had been fitted on the top of the auto. “The battery takes around four hours to charge. Once fully charged, the auto can travel 120km. The battery is partially charged by the solar panel of 365-watt capacity,” said Reddy, a BTech in energy engineering from IIT Bombay, who also worked on some research and development projects on solar power and currently works as a freelancer for various projects.

He said the four-member team interacted with people during their stay in various towns. “We clear their doubts about the sustainability of electric autos and also allow them to take test drives,” Reddy said, adding that cost of converting a traditional auto into a solar-powered one was Rs 1.80 lakh.

He said the maintenance and operational cost of the vehicle was 50 paise per kilometre, which was much cheaper than the cost of running petrol or diesel autos rickshaw at Rs 3- 3.50 per kilometre.

Reddy said the team would reach Durgapur on Friday and then head towards Kharagpur and and Odisha.

“Over 80 students of our institute who were present during the 25-minute presentation and during the test drive were quite impressed with their effort,” he said.