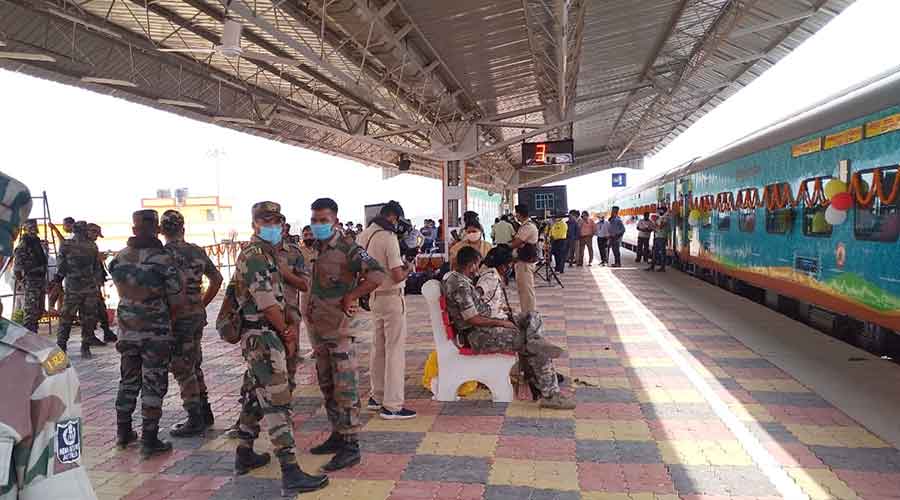 Godda railway station was witness to unruly scenes on Thursday afternoon during an online function to inuagurate a new track and flag off what will be the town's first ever passenger train with MLAs belonging to the rulng dispensation clashing with colleagues of the BJP over taking credit for the successful completion of the project.

In New Delhi, railway minister Piyush Goyal launched the 32km Godda-Hansdiha railway line under the East Central Railway and also flagged off the Humsafar Express at 3pm to put the sleepy town of Godda in Santhal Parganas on the railway map of the country.

But at the rail station in Godda, supporters of local BJP MP Nishikant Dubey got into a scuffle with supporters of Congress MLA Pradeep Yadav (Poriyahat) at  while the programme was underway. Yadav was accompanied by Mahagama MLA Dipika Pandey, state transport minister and JMM MLA from Seraikela Champai Soren, who represented the state government at the programme.

But according to an eye witness, security personnel assigned to the MLAs and those from the district administration swung into action and prevented the skirmish to snowball into a full-fledged clash.

“BJP MP (Dubey) was present with a large contingent of supporters at the station to flag off the train. Simultaneously, MLAs of the ruling coalition  and a minister also turned up with supporters. While one section was hailing the BJP and the Prime Minister for the success of the project, others heaped praise on chief minister Hemant Soren and the erstwhile UPA government at the Centre for the project. Claims and counter-claims led to a verbal altercation, but it was soon brought under under control,” said a local journalist.

Later, the BJP took to social media to accuse chief minister Hemant Soren of sending government sponsored "goons" to attack its MP. The Congress on the other hand hit back at the BJP. “It is shameful of him (Nishikant Dubey) to misbehave with MLAs of the ruling coalition and try to deny their contributions,” said party spokesperson Alok Dubey.

Thursday's event, held about a week before a byelection in Madhupur, holds immense significance for Godda. Speaking during the function from Railway Board headquarters in Delhi, rail minister Goyal dedicated the new track and train to the nation. “Even though this project was first approved during the UPA tenure in 2011, the credit for its successful completion goes to Prime Minister Narendra Modi. It is because between 2011-2014, the project didn’t move an inch and after the formation of NDA government, all such pending projects were given pace,” he said.

Goyal said the project was a milestone for Godda and the Santhal Parganas. The 32km railway line from Godda to Hansdiha was built at a cost of about Rs 550 crore. The line has seven big bridges, 31 small bridges, 10 over-bridges, and 9 under-bridges, he said.

“For the first time, Godda will have train connectivity. To begin with, we are flagging off Humsafar superfast (Express), a direct link to Delhi from today,” he said.

An official of Malda rail division under which Godda station clarified that Humsafar Express was a weekly train. “From April 19, it will run regularly. From Godda, it will leave every Monday at 12.40pm and from Delhi, it will start its journey Tuesdays at 11.45pm. The train will reach Delhi from Godda in about 24 hours,” he said.