Father Stan Swamy's struggle to be taken to panchayats 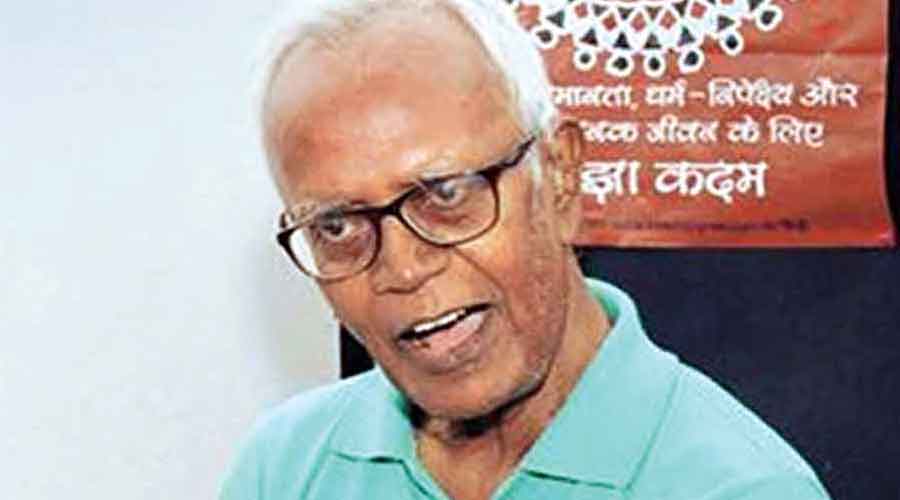 Members of trade unions, non-BJP parties and civil society organisations who have come together in the aftermath of the custody death of Father Stan Swamy have decided to take the Jesuit priest’s struggle for the rights of the oppressed and undertrials to the panchayat level in Jharkhand.

“The best way to pay tribute to Fr Stan Swamy is to create mass awareness among people for whom he fought till his last breath,” said Praful Linda, one of the conveners of the Shahid Father Stan Swamy Nyay Morcha under whose umbrella the groups have assembled.

“We will distribute leaflets, visit door-to-door and organise meetings at the panchayat level to inform the masses about the need to stand up for their rights on jal (water), jungle (forest), zameen (land) and also raise their voice against the suppression of their rights. The awareness campaign will start on September 1 and continue till October 8,” Linda added.

The decision was taken during a daylong convention of the Morcha at Ranchi on Saturday.

“We have also decided to observe October 8 (the day the NIA arrested Fr Stan from Namkum near Ranchi in 2020) by forming human chains, organising protest rallies at all the (264) blocks of Jharkhand and submit a memorandum through block development officers and circle officers addressed to the President seeking a judicial probe into the institutional murder of Fr Stan Swamy, repeal of draconian laws like the UAPA, and the release of the 15 other activists arrested in the Bhima-Koregaon case and the rights activists lodged in jails across the country,” said Aloka Kujur, a tribal rights activist and member of the Morcha.

The 84-year-old and ailing Fr Swamy, a tribal rights activist, died in a Mumbai hospital on July 5 while awaiting bail in the Bhima-Koregaon Maoist links case.

The Morcha has also decided to support the Bharat Bandh called by farmers demanding the repeal of three contentious farm laws on September 25.

Praveer Peter of the Jharkhand Janadhikar Mahasabha and a senior member of the Morcha said the Morcha had filed an RTI query with the state home department, seeking information on prisoners who were yet to be chargesheeted despite being in prison for long.

“After getting the information we will launch an agitation demanding the release of all prisoners who have been put behind bars on flimsy grounds and are languishing without being chargesheeted,” said Peter, an associate of Fr Stan.

Saturday’s convention was addressed by Tripura CPM MP Jharna Das who demanded the return of land acquired for industry but was lying idle.

“Land on which industries have not come up should be returned to the tribals and landholders as has been done in Tripura. The rights of the Adivasis over their land was the main struggle point for Fr Stan Swamy,” Das said.

She called upon like-minded organisations to join hands with the Morcha in the struggle against the “fascist” BJP regime at the Centre.