Delhi-bound farmers to halt at Ranchi for the night

Peasants, moving towards capital to take part in the tractor rally on January 26, will be lodged at a public school 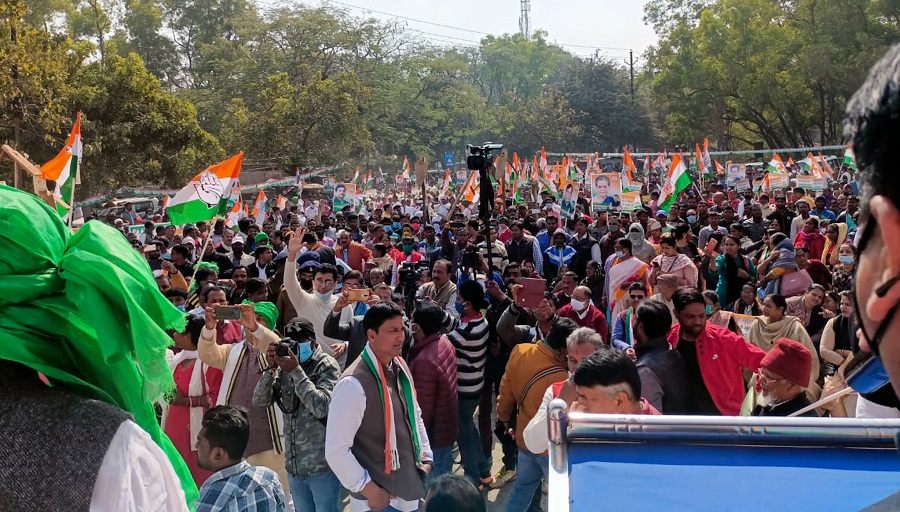 The Congress observes Kishan Adhikar Divas at Morabadi ground in Ranchi on Friday to express their support for farmers protesting against the three farm laws. Later, they marched to Raj Bhavan.
Manob Chowdhary
Our Correspondent   |   Ranchi   |   Published 16.01.21, 11:30 AM

Around 1000 farmers from different neighbouring states of Jharkhand heading to Delhi to take part in tractor rally on January 26 will camp for a night in Ranchi on January 16 en route to their destination.

Capital’s Sikh community and the state unit of All India Kisan Sabha (AIKS) has prepared elaborate groundworks to host them in the city by providing food and other logistic support in their fight against the three new farm laws implemented by the union government.

Jharkhand State Kisan Sabha (JSKS), an affiliate of AIKS said that farmers in transit will make a night halt in Ranchi’s Kamre area on January 16. Dayamani Barla, one of the officials of the outfit informed, “Farmers bound to Delhi will be staying in Guru Gobind Singh Public School in Kamre along Ring Road in Ratu on January 16 night. Ranchi’s gurudwara Samiti has been kind enough to take care of their lodging and langars (fooding) to all the visiting farmers. On January 17, the farmers will be meeting state agriculture minister Badal Patralekh and others in Morabadi before heading forward.”

Barla added that the farmers from Bengal, Bihar, Odisha and Jharkhand are heading to Delhi for the mega rally on Republic Day called by national farm bodies against the new farm laws. For close to two months now, hundreds of farmers continue to protest along Delhi borders against the new laws.

“Farmers from across 26 different states are heading to Delhi for the mega rally. From Bhubneshwar, the delegation of farmers will begin their journey via road and rail on January 15. Similarly, farmers from other neighbouring states too will be heading to Delhi. Many will be crossing via road from Jharkhand for whom we are making necessary arrangements as part of our efforts to help them,” she said, adding that the new farm laws are anti-farmers and should be repealed.

Early this week, the Supreme Court stayed implementation of the farm laws by announcing to form a committee to evaluate it amid the unending protests along Delhi borders in the wake of the Covid-19 pandemic. JMM and Congress, ruling alliance partners in Jharkhand had welcomed the move but demanded that the protests be continued till the laws are completely rolled back. Again on Friday i.e. January 15, state Congress is holding a slew of protests across the state in favour of scrapping of the new legislations.