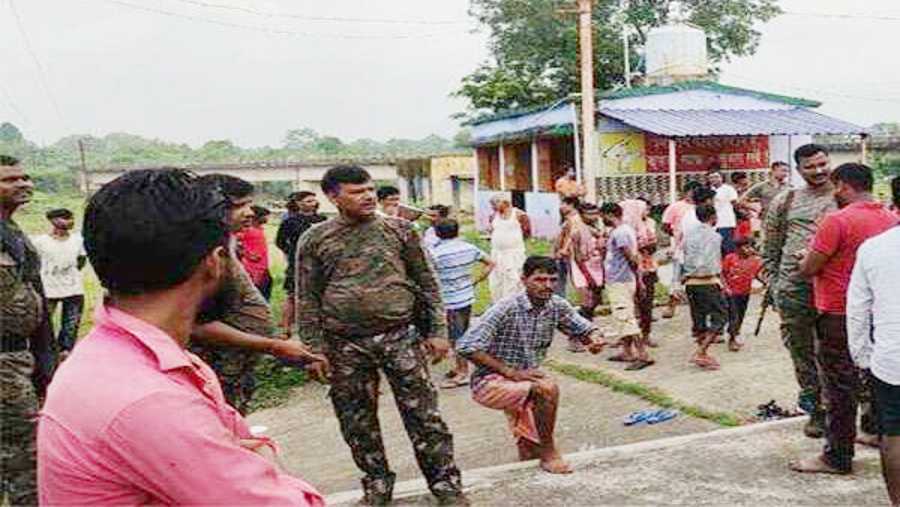 Police investigating the spot from where the dead body of criminal Kamal Sao's was fished out at Nirsa, Dhanbad on Tuesday.
Gautam Dey
Praduman Choubey   |   Dhanbad   |   Published 21.09.21, 06:39 PM

Dead body of a wanted criminal, Kamal Sahu, was found floating in Khudia river of Nirsa block, Dhandbad on Tuesday morning. An alleged clash between the gang members over booty share following a robbery that took place at Maa Kali temple of Bhaljoria area of Nirsa, is being held responsible for the death, by the police.

Local residents of Bhaljoria who spotted the floating dead body in the river adjoining the temple this morning informed police, following which a team of Nirsa Police led by Subhash Singh, officer in charge of Nirsa police station reached the site and fished out the dead body.

The deceased body bore injury marks suggesting that the he been attacked with a boulder which led to his death. His blood stained clothes have also been recovered from an under construction temple in the adjoining area.

According to local residents Sahu and other members of his gang used to consume liqour in the under construction temple on a regular basis. His gang had broken six locks of Goddess Kali temple to loot the gold ornaments adorning the deity. Following which they fled with the gold.

A member of the Maa Kali Temple management committee, said “When we reached the temple this morning we found around six locks broken and several articles strewn around.”

“The thieves have taken away the earring and other ornaments offered by the devotees during the robbery,” said the temple committee member.

Contacted, Subhash Singh said, “The deceased criminal had been jailed four -five times in several cases of robbery and theft. Local residents had informed us that he died due to a clash between the members of gang last night. They were fighting over the booty share for the robbery conducted last night in temple”

“We are investigating the case. His dead body has been sent for post mortem at Sahid Nirmal Mahto Memorial Medical College and Hospital. The autopsy report may provide some clues regarding his unnatural death,” said Singh.