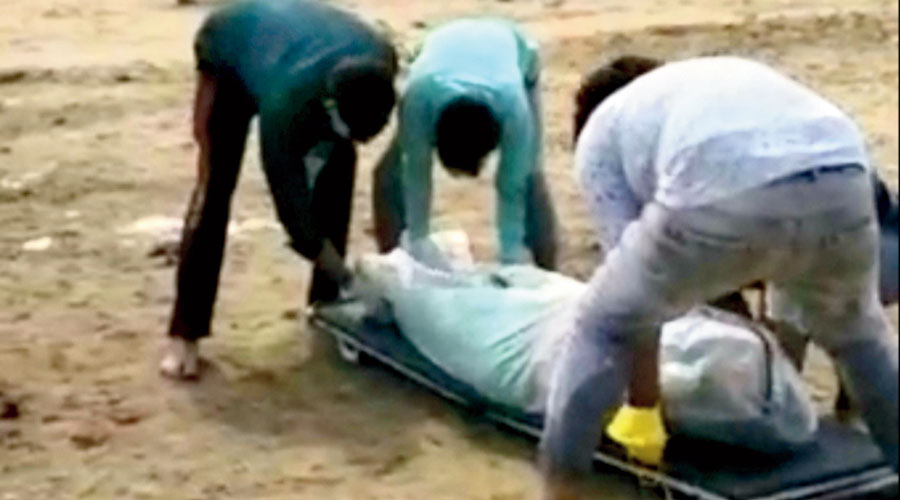 Four Muslim friends helped a Hindu youth cremate his mother, who died of Covid in Jharkhand’s Palamau district, after his relatives refused to come fearing that they would contract the virus.

Mohammed Saif Hussain, Jaffer Mohammed, Asif Rain and Mohammed Shamshad, residents of Muslim Nagar, rushed to the nearby Raja Harishchandra Ghat after one of them spotted Prince Gupta standing helplessly with his mother’s body in an ambulance as there was none to carry her to the cremation ghat.

Muslim friends help in last rites of the mother of the Hindu youth.
Shabbir Hussain

Meena Devi, 55, had passed away early on Friday morning. None of her relatives came forward to help Prince take the body for the last rites due to fear of contracting the virus.

“One of our friends, Mohammed Saif Hussain, who studies with Prince in the same college, saw him near the crematorium and informed us. We were on Ramazan fast and were at home for Friday namaz,” Jaffer said.

Muslim friends help in last rites of the mother of the Hindu youth.
Shabbir Hussain

“However, when we were informed by our friend, we immediately decided to help. We rushed to the cremation ghat to help our friend conduct the last rites of his mother,” Jaffer, who also contributes to a vernacular daily, added.

He said Prince had brought the body of his mother all alone in an ambulance. “We helped him carry the body 200 metres to the ghat. We also assisted him with the rituals. We gave him some money to help him to perform the rituals,” Jaffer said.

Meena Devi had been admitted to the Palamau Medical College and Hospital in Daltonganj for five days after testing positive for the coronavirus.

“After returning home, we sanitised our hands and also took bath. It was a spontaneous decision to help our friend who was in distress. We could not afford to think about the dangers of the coronavirus infection,” Jaffer said.