Payment is due only for the month of March, which will be cleared within a week: Manager 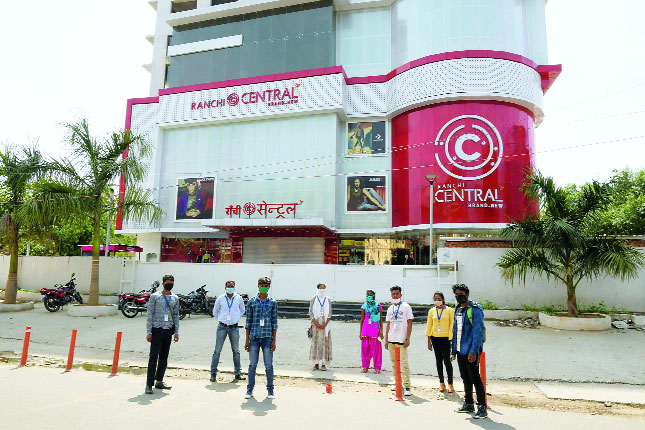 Around 14 private security guards deputed at the Central Mall on Main Road in the state capital have complained that their employer has not paid their salaries since January and during the lockdown they are facing hardships.

The guards staged a demonstration in front of the mall on Tuesday.

“Our monthly remuneration is Rs 12,000 but since January we have not been paid,” said Santoshi Kumari, one the agitating guards. “After we mounted pressure on our manager, he transferred Rs 4,000 in our account and is now taking advantage of the lockdown giving one pretext after another to delay the payment due to us.”

Abhiskhek Dungdung, another security guard, echoed her saying it had become difficult for them to survive.

“How can we survive when the employer is not paying us?” he questioned.

Asked about the name of their employer, they named KIS Security Private Limited.

Contacted, Rajesh Kumar, manager of KIS Security Private Limited, claimed payment of only one month was due to the guards, and cited the lockdown as the reason.

“Payment is due only for the month of March, which will be cleared within a week. The reason behind the delay is the lockdown. Payment of guards is not due since January as far as I know,” Kumar said.

He said that due to the lockdown the income of the employer has plummeted.

Told about the manager’s response, Santoshi Kumari said the manager was lying.

“The employer is taking advantage of our innocence and passing misleading information,” Kumari said.

Deputy labour commissioner of Ranchi, Pradeep Robert Lakra, could not be contacted for comment.

S.C. Gope, a senior official at Lakra’s office, said that action had already been taken in the matter after it came to the knowledge of this office.

“A section of guards had come to me on Monday. On their information, direction has been given to the employer to report after clearing all dues of workers within three days,” Gope said.