Advertisement
Home / Jharkhand / 1289 workers back in Dhanbad with worries

1289 workers back in Dhanbad with worries 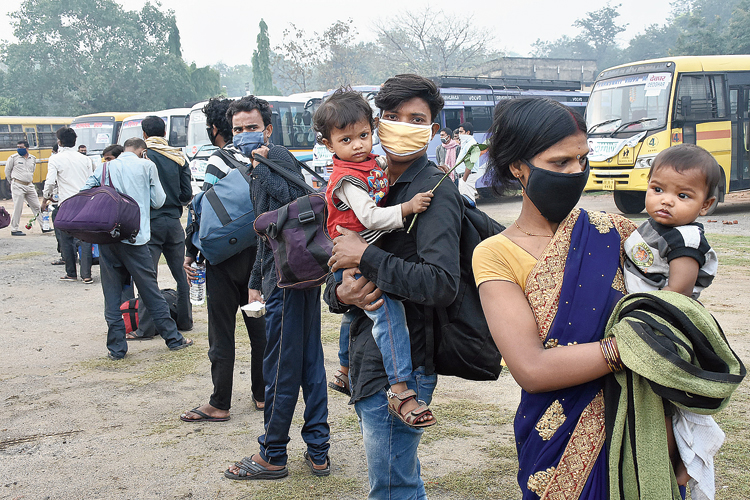 Migrant labourers of Jharkhand stand in queue at Golf Ground in Dhanbad after arriving from Surat in Gujarat on Wednesday
Pictures by Prashant Mitra, Shabbir Hussain and PTI
Praduman Choubey   |   Dhanbad   |   Published 06.05.20, 11:32 PM

A total of 1,289 migrant workers and their family members on Wednesday reached Dhanbad from Surat in Gujarat and they said they paid Rs 715 each to an NGO at a time they have no job and the future looks bleak.

Santosh Yadav, a worker from Koderma who came on the train, said: “I paid Rs 715 to an NGO member who provided me the train ticket.”

Out of the 1,233 passengers, 1,157 were from Giridih, 40 from Deoghar, 27 from Ranchi, five from Koderma, two from Dhanbad and one each from Hazaribagh and Dumka.

Since most of the workers were from Giridih, the deputy commissionxer of Giridih, Rahul Kumar Sinha, had also come to the Dhanbad station with a large number of officials from to take back the workers and their family members.

Amit Kumar said: “The workers of seven districts reached on Wednesday in the Shramik Express out of which more than 90 per cent were from Giridih. We made adequate arrangements for their medical screening after which they were sent to their respective places.”

The 56 passengers who reached Dhanbad in two private buses were sent to the Golf Ground. After medical screening by a team led by the medical officer-in-charge of sadar hospital, M. Narayan, they were sent to their respective places.

Murli Kumar Verma, a worker from Giridih, said: “I used to work as a welder in a small workshop in Surat and faced a lot of difficulty in surviving ever since the lockdown was announced. Only I know how I reached Dhanbad.”

Workers who were brought from Ernakulam show their railway reservation tickets at Hatia station in Ranchi, pointing out that they paid Rs 830 for travelling on the train

Jageshwar Mahto, a resident of Katrasgarh in Dhanbad, who reached in a bus, said: “I have been working in Surat for the past five years with a private courier company. After the lockdown, the company sent us a mail saying operations and offices are closed so we can leave for our respective places. We were facing a lot of difficulties in Surat for the past 45 days after the closure of our office and somehow I have reached Dhanbad.”

The migrant workers were sent to their respective places in buses after thermal scanning by a team of doctors led by district civil surgeon Gopal Das.