Advertisement
Home / Jharkhand / Coronavirus claims 6 of a family in Jharkhand

Coronavirus claims 6 of a family in Jharkhand

An 88-year-old resident of Katras contracted the virus while she was in Delhi, which she subsequently transmitted to her 5 sons 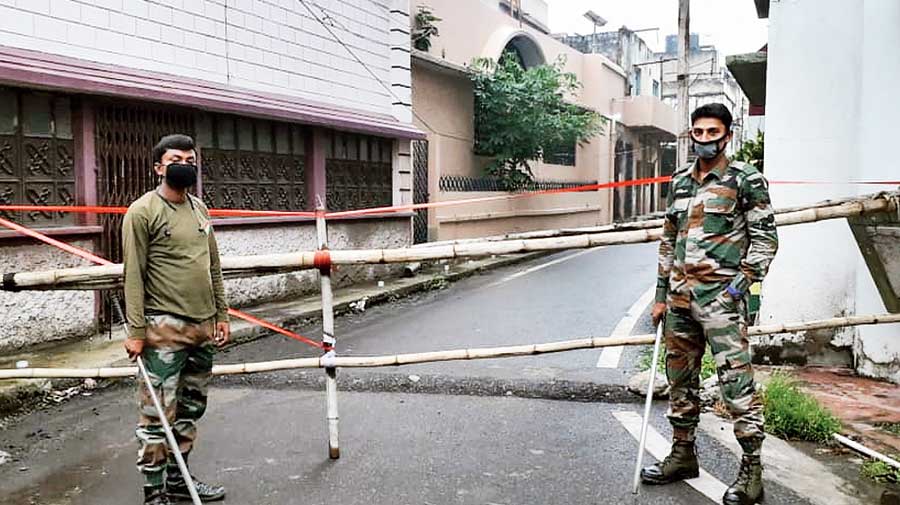 The containment zone at Rani Bazar in Katras, Dhanbad, where the house of the ill-fated family is located.
Shabbir Hussain
Animesh Bisoee   |   Jamshedpur   |   Published 22.07.20, 01:47 AM

The coronavirus claimed six members of a family in Jharkhand earlier this month, a doctor has said.

Dhanbad civil surgeon Dr Gopal Das said a woman and her five sons, all of whom passed away in July, had tested positive for Covid-19. The family resides in Katras area of Dhanbad, around 150km northeast of the capital Ranchi.

“It is unfortunate that the infection took a toll in such a manner on an entire family. Initially, the woman, who had come from Delhi and might have contracted the disease there, died at Patliputra Medical College and Hospital (in Dhanbad) due to heart ailments. She was found to be Covid-19 positive after death. Thereafter, her five sons, all above 60 years, died due to comorbid conditions and Covid-19. We had taken swab samples from all members of the family. We also admitted her five sons in hospital after they tested positive. None of the remaining family members have contracted Covid-19 at the moment,” said Das.

Durga Devi, 88, stayed with her youngest son in Delhi and had come to attend the marriage function of her grandson in Dhanbad in end-June, locals said.

“The family is engaged in trading in wooden furniture and hardware at Rani Bazar in Katras. The woman had come from Delhi to attend the marriage function of her grandson in the last week of June. On July 4, she was rushed to PMCH (Patliputra Medical College and Hospital) with breathing difficulties and died of heart failure on the same day. However, her test report, which came the next day, confirmed Covid-19. Subsequently, other members of the family were kept in quarantine and their swab samples collected for testing,” a trader, who lives in the same locality, said.

Durga’s fifth son Binod Choudhary, 60, was admitted to Central Hospital in Dhanbad on July 8. He died on July 9 night and his test report said he had contracted the coronavirus.

Fourth son Kunj Bihari, 64, who was suffering from cancer and developed breathing distress was shifted to Tata Main Hospital in Jamshedpur. He died on July 12 and his Covid-19 report also came positive.

The eldest son, Uma Shanker Choudhary, 72, was referred to Rajendra Institute of Medical Sciences in Ranchi from PMCH after testing positive for Covid-19. He also complained of breathing distress and died on July 16.

On July 19, second son Ratan Choudhary, 70, who also tested positive for Covid-19, died due to complications from the disease at PMCH in Dhanbad.

“The youngest son, who is aged 55, did not come for the marriage function and is still in Delhi. The remaining members are in self-isolation on the advice of the district administration,” said a neighbour.