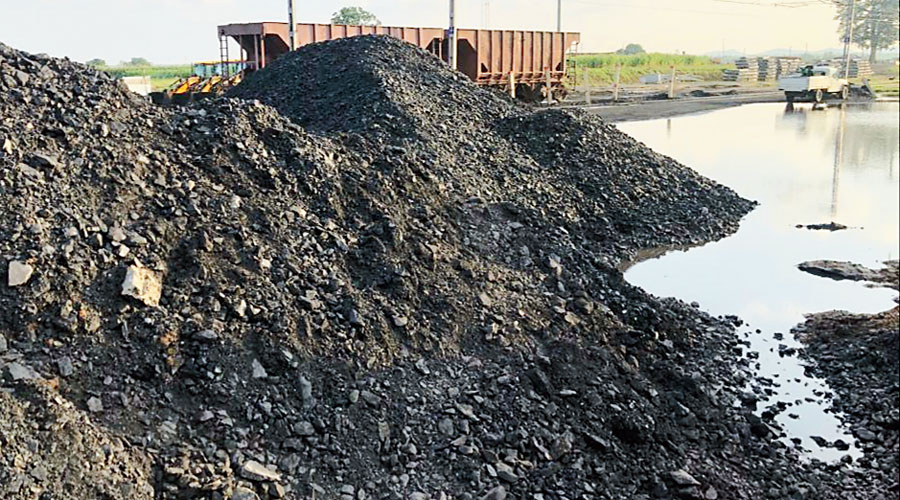 Coal being transported at the railway sidings of the NTPC in Barkagaon in Hazaribagh.
Picture by Shabbir Hussain
Animesh Bisoee   |   Jamshedpur   |   Published 11.01.21, 11:42 AM

The eastern zone bench of the National Green Tribunal (NGT) in Delhi has directed state-run power giant NTPC to install a conveyor belt at Barkagaon in Hazaribagh district of Jharkhand for transfer of coal within three months.

The order was passed on Thursday and its copies were received on Friday evening.

The NGT has also asked the Jharkhand State Pollution Control Board (JSPCB) and the state government to ensure that the order is implemented in time and also ensure that fugitive coal dust generated is not dispersed indiscriminately.

The verdict was given during hearing of a petition filed by Hazaribagh-based social worker Tripurari Singh aggrieved at the illegal transportation of coal and its dumping by the NTPC in the villages of Katkamdag, Baanadag, Banka, Sultana, Sadampur, Hathaemedi and Mayatu in Hazaribagh district in violation of pollution norms.

The petitioner said such activities had affected the river and ponds in the area. He said about 8.5 acres of forestland had been encroached by the railways and the NTPC for construction of a railway dockyard and used for dumping of coal and transportation and because of such activities the health of the inhabitants had been adversely affected and they had fallen victim to breathing problems.

Advocate Satya Prakash, who appeared for the petitioner, said: “The NGT had constituted a committee of five members in July 2020 in the matter of Tripurari Singh versus ministry of railways and others. The NGT said in its order that the Jharkhand State Pollution Control Board and government of Jharkhand shall monitor the work and transportation of the coal in these areas. The NGT has said its order shall be strictly followed by the parties. The five-member committee has also recommended a 20-feet boundary wall should be constructed and chemical dusting of coal should be dumped at the dedicated pond which shall be constructed by the NTPC and mining companies apart from construction of a conveyer belt within three months.”

In September last year, the team, comprising two NGT members, Hazaribagh deputy commissioner Aditya Kumar Anand, petitioner Tripurari Singh and Ashok Kumar Yadav from the state pollution board, visited the spot. Local farmers told the team members that the railway siding is surrounded by fields and their farm land is being adversely affected by coal dust and also the residue left behind by coal.

The locals also alleged that this has resulted in lung problem and breathing issues in many residents. They said that even the well water has become black and not fit for drinking due to the railway siding where coal is being off-loaded.

The petitioner’s counsel further said the land that the NTPC and the mining company used for transporting coal has been acquired for the Shivpur-Tori railway line. Hence, the NTPC now uses this land for coal dumping and transporting, he added.

The NTPC has been mining coal from Pakri-Barwadih and using the railway siding at Katkamdag for loading coal racks.

Transportation of coal to the railway siding is carried out through dumpers. Nearly 150 acres of cultivable land has been allegedly polluted due to the transportation and dumping of coal. As a result of coal spill from the dumpers, the land is no longer suitable for cultivation.