STATE DIGEST: One of the youths involved arrested; protest against irregular water supply; demonstration against tax realisation; compensation for jumbo attack deaths; and probe into suicide 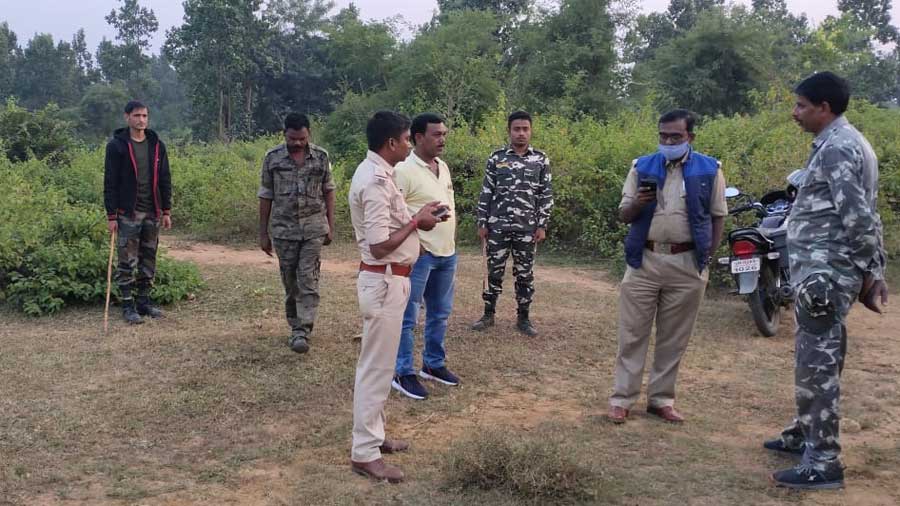 Police officers investigate the rape case in a forest in Chatra on Tuesday.
Vishvendu Jaipuriar
Our Bureau   |   Published 03.11.20, 11:23 PM

A Class X student was allegedly gang-raped by two youths in Mahesha forest in the Mayurhund police station area in Chatra district on Monday.

The girl was abducted while on her way to school through the forest.

One of the alleged rapists was arrested from Gumla on Tuesday evening.

According to the police, the 14-year-old girl was on her way to her school, Harijan Janta Uchch Vidyalaya at Manjhgawan, around 3km from her home in Mahesha village. She was intercepted by the youths on a bike. They gagged her using her dupatta and took her to the forest.

Local residents reached the spot on hearing her cries, but the youths managed to flee.

The villagers identified the duo as Sandeep Kumar Mehta and Mundrika Mehta, who are residents of the area.

Mukhiya thrashed: The mukhiya of Giddhore in Chatra, Shakuntala Devi, her husband, former mukhiya Jawahar Yadav, and brothers-in-law Dharmendra Kumar and Gobind Yadav were beaten up on Monday by a few men. The men were armed with lathis and other weapons. Two motorcycles were damaged in the incident. The injured have been admitted to Hazaribagh medical college and hospital.

More than 100 residents of various parts of Kustore, Alkusa and Khaira, who are dependent on pit water supply by BCCL, on Tuesday staged a demonstration at the Alkusa colliery office and later gheraoed the office of a private miner protesting the irregular supply of water for over two months. The protest ended after intervention by police who assured the demonstrators that they will take up the issue with the BCCL administration. The protestors said that due to pipeline leakages, they are not receiving regular water supply.

A delegation of Jharia residents protesting the aggressive realisation of holding tax by Dhanbad Municipal Corporation on Tuesday met local MLA Raj Sinha. They pointed out that the civic body officials while visiting the shops and business establishments to realise taxes are threatening to lodge cases and seize bank accounts in case of any default. The protestors claimed that they are already paying taxes to another civic body, the Jharkhand Mineral Area Development Authority, and there was no need to pay holding tax to Dhanbad Municipal Corporation.

The forest department doled out compensation to the kin of those killed in elephant attacks in various villages in Gola block in Ramgarh district. The money was distributed at an event on Tuesday. The chief guest, MLA Mamta Devi, gave Rs 3 lakh to the widow of Suleman Ansari, a resident of Auradih. Injured Ramesh Murmu’s family received Rs 15,000. Cheques of Rs 1 lakh each were handed to the dependents of three dead. The MLA promised housing facilities to the affected soon.

A team of officials at Dandaikala village in Hazaribagh on Tuesday.
Vishvendu Jaipuriar
Probe into farmer suicide

A team led by the Sadar block development officer on Tuesday went to Dandaikala village in Amnari panchayat of Hazaribagh to probe the suicide of 35-year-old farmer Awadhesh Kumar Singh.

Singh’s relatives charged the employees of a microfinance company for harassing him regularly to repay loans. They said Singh failed to bear the humiliation and committed suicide by hanging himself from a ceiling fan on October 30.

Bhagat visited the village and spoke to the residents and relatives. He assured government benefits to Singh’s widow.

The house where the incident happened.
NN Dubey
Couple set themselves on fire

A couple set themselves on fire at a house near the referral hospital at Ranka on Monday night. The woman died in the incident, while her husband was seriously injured. He is being treated at the hospital.

Police said there was an argument between the couple over a minor dispute.

The deceased was identified as Khushbu Devi, 25, wife of Santosh Ram.

Santosh used to run a tea stall near the hospital. They have three small children.

The couple were taken to the referral hospital, where doctors referred Khushbu to RIMS, Ranchi, where she died on Tuesday.