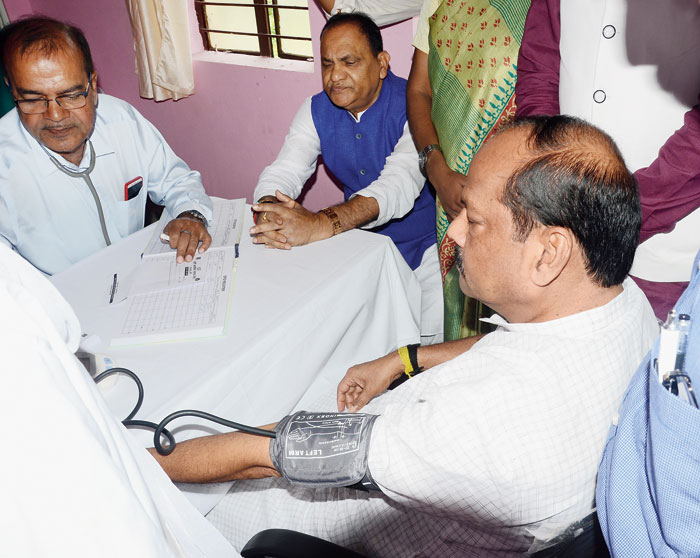 Chief minister Raghubar Das gets his blood pressure checked at the newly inaugurated Atal clinic at Edalhatu in Ranchi on Friday.
Picture by Prashant Mitra
Our Correspondent   |     |   Published 16.08.19, 06:57 PM

Chief minister Raghubar Das on Friday inaugurated an Atal clinic at Edalhatu in Morabadi that will offer free treatment and medicines to local residents.

The clinic was part of the 25 Atal clinics launched in 17 districts of Jharkhand on Friday, to mark the death anniversary of former Prime Minister Atal Bihari Vajpayee.

“This clinic is dedicated to our beloved former Prime Minister Atal Bihari Vajpayee. We have set a target to open as many as 100 Atal clinics across Jharkhand by September 25. In the 2019-20 budget, the government had promised to start clinics at the colony level,” the chief minister said in his address.

The CM directed civil surgeons of the districts to visit Atal clinics daily to ensure their proper functioning.

The clinic will operate from the RMC ward office. The government will appoint a doctor who will be available at the clinic from 6-10 in the morning and 6-8 in the evening.

The Atal clinic, which will function as a normal outdoor patients’ department, will offer free treatment and medicines for normal health problems.

The facility of vaccination will be available twice a week.

Pregnant women can seek free medical consultation at the clinic, which can also conduct tests for anaemia, tuberculosis and malaria.

State health secretary Kulkarni said Atal clinic would be opened in urban areas having a minimum population of 15,000 to 20,000 people who don’t have easy access to sadar and government hospitals and health centres.

“Local urban bodies will have to provide space for these clinics, which will be opened in accordance with the requirement. It is not necessary that every ward under the civic body will have a clinic,” Kulkarni said.

On the Ayushman Bharat scheme, the flagship scheme of the central government that was launched from Ranchi on September 23 last year, the CM said: “We had set a target to include 2.85 crore people belonging to 57 lakh families of Jharkhand under this scheme. So far, golden card has been issued to 40 lakh individuals. We have set a target to issue golden cards to the remaining 2.45 crore people by the end of September 23. The government has launched the drive from today (Friday).”

On the sidelines of the clinic launch, the chief minister handed over golden cards to some of the local residents.