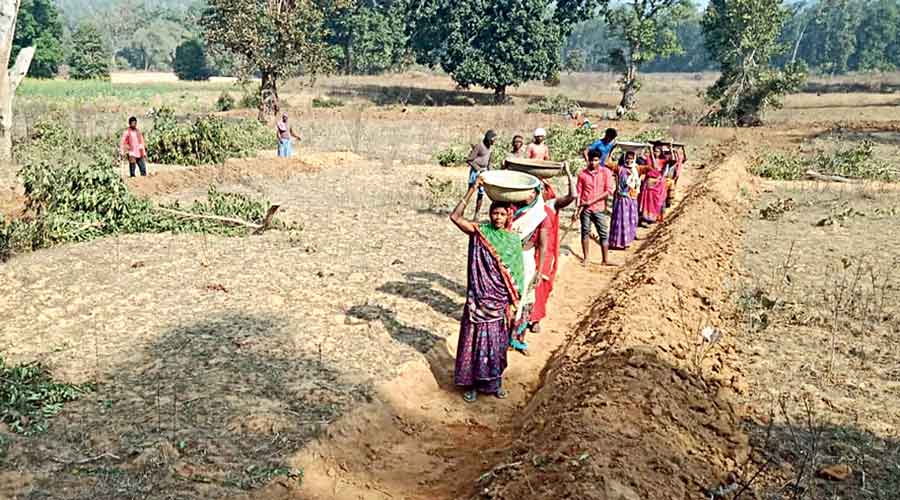 The Centre has sought an action taken report from Jharkhand’s rural development ministry on the irregularities detected in the concurrent audit of MGNREGA schemes in the state within February 7.

The letter issued by MGNREGA director Dharamvir Jha to MGNREGA Jharkhand commissioner B. Rajeshwari on January 24 requests the latter to “ensure that action is taken in all such cases with full force for all the gram panchayats”.

The action should have information on FIR lodged, disciplinary proceedings initiated and concluded, recovery proposed and made” within three weeks.

The letter also seeks action within three weeks to ensure the “system is in place for monitoring action being taken on the findings of the concurrent audits and systematic changes/checks introduced for stopping/mitigating the irregularities”.

“A strict time-bound action in full force within the period is required of the state to assure the Ministry of the seriousness of the state government to abide by the framework of MGNREGA,” the letter adds.

The Centre has also asked the state government to start full social audit from January and “ensure full recovery of the amount involved in social audit findings on misappropriation”.

Jharkhand MGNREGA commissioner B. Rajeshwari said she was on a field visit and had not seen the letter.

“I am on a field visit and the letter must have reached the office. It is good that the Union ministry has set a timeline for action and we will ask the district programme coordinators to initiate action and intimate us within the given deadline. Action and recovery have to be initiated ultimately at the district level,” the commissioner said.

James Herenz, a member of the state steering committee of the social audit unit of the rural development department of Jharkhand, had in a letter on January 16 sought the Centre’s intervention in ensuring punitive action over irregularities found during a concurrent audit of work under MGNREGA 2021-22 in the state.

The concurrent social audit report, which was attached with the letter, revealed that only 25 per cent of the workers were found at the sites where projects under Mahatma Gandhi National Rural Employment Guarantee Act (MGNREGA) were underway in Jharkhand.

A total of 29,059 schemes were verified in 1,118 panchayat areas in all the 24 districts of Jharkhand by the audit, which was completed in October and was submitted a few days back to the state rural development department.

There are 36 projects where definite evidence has been found of work been done by JCB excavator machines (prohibited under MGNREGA). Around 85 projects were detected where muster rolls have not been created at all but work has been started,” the letter points out.

Herenz’s letter also states that in social audits from 2017 onwards, nearly 94,000 cases of irregularities involving a misappropriation of Rs 54 crore had been pointed. But state rural development officials seem reluctant in realising the penalty from offenders, the letter adds.

“The state government has also failed to recruit MGNREGA Lokpals in the state, which has hindered the complaint grievance redress mechanism,” the letter adds.