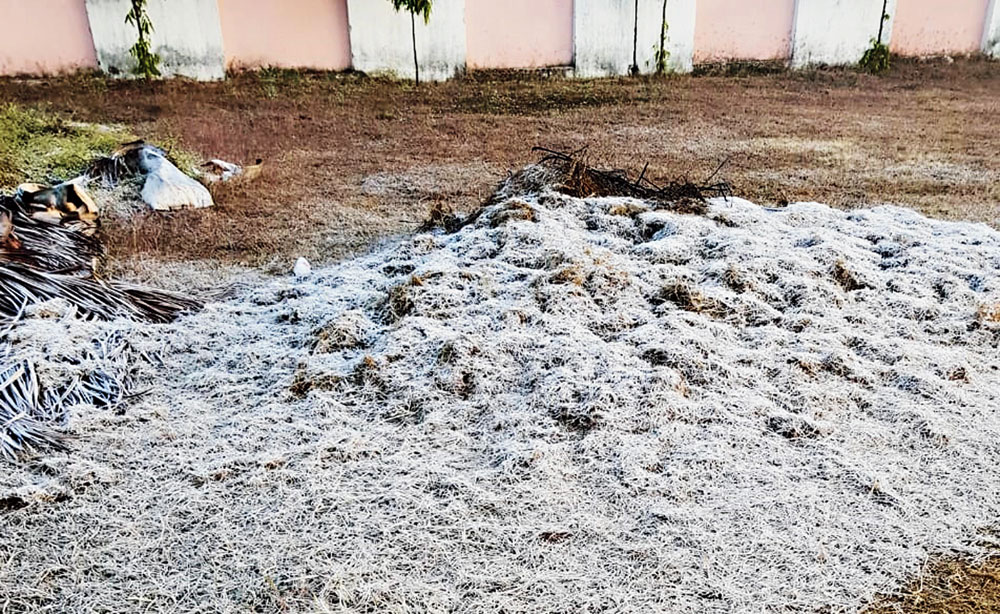 A film of frost covered grass and car roofs in some places in Ranchi and its outskirts, including McCluskieganj on Monday. Such a phenomenon, often called grass frost, takes place when cool air causes water vapour to condense and form droplets on the grass.
Telegraph picture
Our Special Correspondent   |   Jamshedpur   |   Published 24.12.18, 10:09 PM

If the weather is bone-numbing, brace for worse in the coming 48 hours.

The IMD offices in Ranchi and Patna on Monday said cold wave conditions in Jharkhand would continue for another two days, courtesy the dominating North Wind, and the Celsius would plummet further.

“Heavy snowfall in northern parts of the country has made the north-westerly winds dominant. Severe weather is expected in the next 48 hours,” said R.S. Sharma, an IMD scientist in Ranchi.

Jamshedpur recorded its season’s lowest minimum temperature of 7°C against 8.7°C on Sunday. Several other parts of the Kolhan region, including Chaibasa in West Singhbhum and Seraikela-Kharsawan too witnessed a new low of around 8°C.

North-eastern parts of the state, including Pakur and Sahebganj, were relatively warmer as the minimum hovered around 10°C.

The Regional Meteorological Centre in Calcutta said conditions were favourable for a fresh Celsius plunge.

“The entire state is in the grip of the bitter cold north-westerly winds, which is resulting in temperature drop. Minimum readings are expected to slide by another degree or so in hilly areas,” said a duty officer. He added that the weather would also remain dry.

Residents said they hated the harsh weather. “I have stopped venturing out of my house after sunset because the chill is so intense. In the mornings, I delay my morning walk schedule by an hour or more,” said Somnath Das, a resident of Bistupur in Jamshedpur.