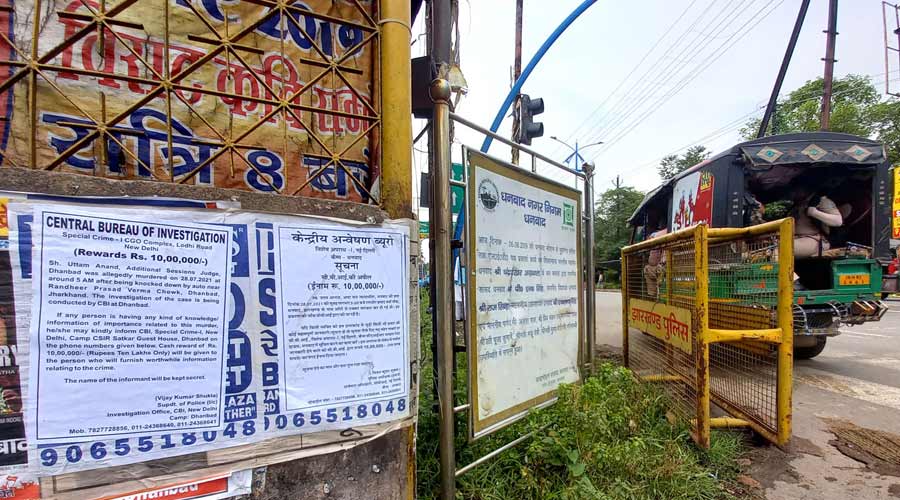 The increased reward money (Rs.10 lakh cash) notice for anyone sharing ‘information of importance’ on the alleged murder of Dhanbad judge Uttam Anand put up by CBI in different places of Dhanbad on Wednesday.
Picture by Gautam Dey
Praduman Choubey   |   Dhanbad   |   Published 08.09.21, 10:59 PM

The Central Bureau of Investigation (CBI) led by Superintendent of Police (UC) Vijay Kumar Shukla doubled its reward money to Rs 10 lakh on the death of Dhanbad-based additional district and session judge Uttam Anand. The probe agency had earlier announced reward money worth Rs 5 lakh for providing worthwhile information in connection with the murder case.

Posters in this regard have been put up at different nooks and corners in the district on Wednesday.

“Shri Uttam Anand, Additional Session Judge of Dhanbad was allegedly murdered on 28.07.2021 at around 5 am after being knocked down by auto near Randheer Prasad Verma Chowk, Dhanbad, Jharkhand. The investigation of the case is being conducted by CBI at Dhanbad,” the posters read in Hindi and English.

“If any person is having any kind of knowledge/information of importance related to this murder he/she may kindly inform CBI’s Special Crime 1 cell, New Delhi, Camp CSIR Satkar Guest House on the phone numbers given below,” it said.

“Cash reward of Rs 10,00,000 will be given to the person who will furnish worthwhile information relating to the crime. The name of the informant will be kept secret,” the posters read.

The CBI had on August 15 put up posters announcing a reward of Rs 5 lakh for anyone sharing information of importance on the death of the 49-year-old additional district judge and after a gap of around 23 days, another set of posters mentioning the double reward money were spotted on Wednesday.

The CBI has been investigating the case since August 4. They have sent the two main accused including the auto driver Lakhan Verma and his accomplice Rahul Verma to jail.

The CBI conducted narco-analysis on two accused and used various scientific tests on the accused in its bid to solve the mystery.

One FIR relates to an alleged theft of three mobile phones from the home of one Purnendu Vishwakarma while the other is for the theft of a three-wheeler of Sugnu Devi which was allegedly involved in the incident.

Notably, the theft of the auto-rickshaw took place days before the incident but was reported to the police only on July 29.

The second FIR was registered with regard to the theft of three mobile phones from the temporary accommodation of Purnendu Vishwakarma, a staff of a railway contractor at Hill Colony based railway outhouse. The mobile theft, however, was carried out two-three days ahead of the auto theft. The two accused are also involved in several other mobile theft incidents earlier.

These cases were reported as isolated incidents by the state police. Going by the procedure, the agency has taken over these FIRs as its own cases.