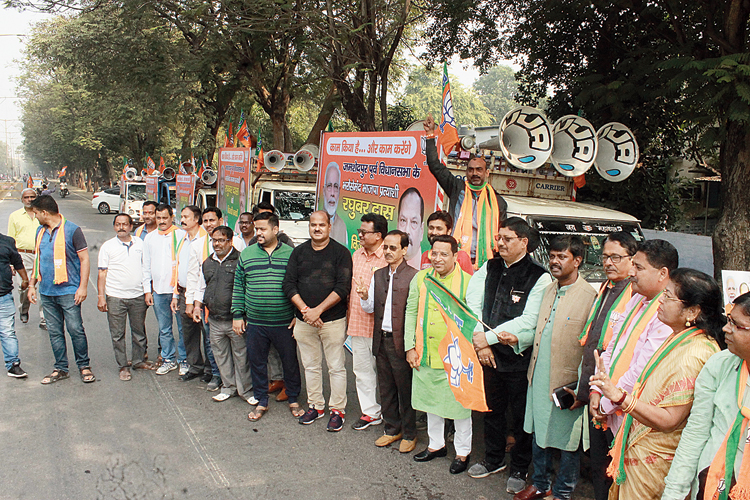 Remember the foot-tapping yesteryear number, “yeh desh hai veer jawano ka”? But if you think of Dilip Kumar when you hum the song from Naya Daur, think again.

There’s more. A song for Gourav Vallabh, the XLRI finance professor who is making his poll plunge as the Congress candidate against Das, is a take on “Arre deewanon”, the famous Don number. “Jamshedpurwalon, inhe pehchano, yeh hain Prof Gourav….” goes the catchy rip-off.

But Das’s arguably biggest rival, BJP rebel and Independent candidate Saryu Roy, is however relying on slogans, not songs. “Aapka ek vote har samasya ka samadhan hai, bhay aur atyachar se mukti ke liye vote kare cylinder par (Your one vote is a solution to all problems, get rid of fear and oppression by voting on the cylinder symbol).

The poll showdown is also showtime for the masses.

Bablu Jha, district Congress spokesperson, said they had fielded candidates in Jamshedpur East and West constituencies as a part of the pre-poll seat-sharing deal with the JMM and RJD.

“We want to reach out to most voters before the campaigning ends on December 5. We are using songs sung by local artistes with our own lyrics set to the tunes of popular Hindi, Bengali, Bhojpuri and Punjabi songs,” he said. A Congress source said they rolled out 12 vans with speakers to air songs and speeches.

“We are also using an LED van in Jamshedpur East to showcase the misrule of CM Raghubar Das,” added Jha.

JVM candidate for Jamshedpur East, Abhay Singh, however, is banking on his pre-recorded speeches. Mani Mohanty, JVM district spokesperson, said Singh’s hard-hitting speeches on his plans for the poor struck a chord.