It aims at presenting facts and figures, arguments and counter-arguments, dates and data to highlight that he was a law-abiding and truth-speaking citizen 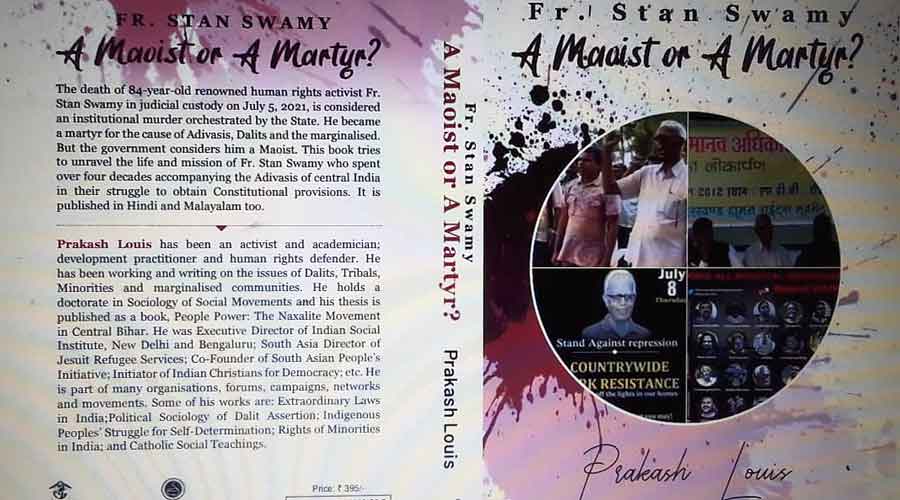 A book on octogenarian Jesuit priest and tribal rights activist Father Stan Swamy, who died in judicial custody in July, which aims to highlight he was a “law-abiding”, “peace-loving” and “truth-speaking citizen”, will be released in New Delhi on Friday.

Fr Stan Swamy: A Maoist or a Martyr?, written by academic and human rights defender Prakash Louis, is divided into seven chapters which present facts and figures, arguments and counter-arguments, dates and data on the priest’s work.

“This book aims at presenting facts and figures, arguments and counter-arguments, dates and data to highlight that Father Stan Swamy, who died in judicial custody after being arrested on the accusation of being a Maoist, was a law-abiding, peace-loving, truth-speaking citizen. The book also examines the fact that he was fundamentally and foundationally connected with the lives and struggles of the Adivasis of central India whose lives, rights and dignity was his primary focus,” said Louis, who has been working and writing on the issues of Dalits, tribals, minorities and all marginalised communities.

“Fr Stan also saw, observed, researched, spoke, wrote, and trained the Adivasis to voice their concerns whenever and wherever their rights were violated and trampled upon. Hence, those in power from the dominating caste, class, gender saw him as a threat to their power, position and privileges. So, they named him a friend of the Maoists and called him anti-national, anti-development and anti-peace. This age-old game of naming, blaming and shaming was not enough for them since (Fr) Stan was not the one to be cowed down,” said Louis.

He is currently the convener of the Bihar-UP Jesuit Migration Hub, a Jesuit organisation that addresses the issues of distress migration from Bihar and Uttar Pradesh, tries to identify the originating points from these states and follows up with the organisations working on migrants in destination states like Maharashtra, Andhra, Karnataka, Kerala and Tamil Nadu.

Louis, while thanking everyone who contributed to the creation of this book, said: “They incarcerated Fr Stan in false cases and remanded him in custody. Even from Tajola jail, he tried to obtain bail so that he can work towards securing bail for all the political prisoners. But now his martyrdom has raised fundamental questions about the extraordinary laws and unconstitutional way of governance. Fr Stan’s martyrdom liberates every citizen of this country from tyranny.”

Fr Stan was arrested by the National Investigation Agency on October 8, 2020, from his Namkum residence near Ranchi in Jharkhand and lodged in Taloja Central Jail in Navi Mumbai. He died under judicial custody while undergoing treatment at a private hospital in Mumbai in July.

Louis has served as the executive director of the Indian Social Institute, New Delhi and Bangalore and South Asia director of Jesuit Refugee Services, was the co-founder of the South Asian People’s Initiative and initiator of Indian Christians for Democracy.

Some of his books are — Extraordinary Laws in India, Peoples Power: Naxalite Movement in Central Bihar, Political Sociology of Dalit Assertion, Indigenous Peoples’ Struggle for Self-Determination, Rights of the Minorities in India and Catholic Social Teachings.

He holds a doctorate in sociology on social movements and his thesis was published as People Power: The Naxalite Movement in Central Bihar.

Louis was and is part of many organisations, forums, campaigns, networks and movements.