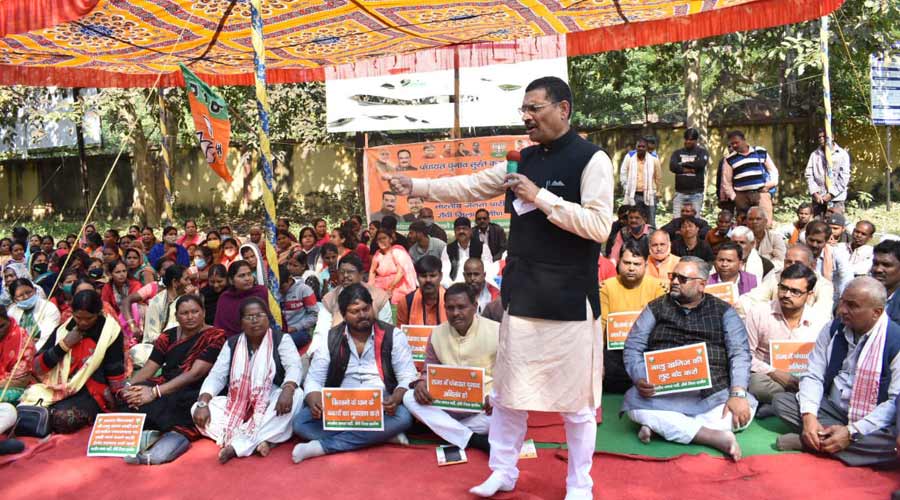 BJP leaders staged demonstrations across the over 250 blocks in Jharkhand on Saturday demanding holding of panchayat elections at the earliest and cancellation of the recently held preliminary tests by Jharkhand Public Service Commission (JPSC).

Addressing a demonstration of party workers and leaders in Namkum, state BJP president and Rajya Sabha MP Deepak Prakash accused the ruling Hemant Soren-led government of delaying panchayat polls to avoid decentralisation of powers, claiming that it would stop the unabated “loot” by the state government at the grassroots.

Ministers have said in the past that the state government was in talks with the Election Commission of India (ECI) regarding panchayat polls and was waiting for the ECI to announce the dates.

At the demonstration on Saturday, Prakash said that glaring anomalies in the recently held preliminary exams for JPSC 7 to JPSC 10 had come to light, but the government was unwilling to cancel the exams despite widespread protests by candidates. “Further investigation into the matter will bring to fore names of several Congress party and Jharkhand Mukti Morcha (JMM) leaders involved in the JPSC scam,” he alleged.

On Saturday, the party addressed a memorandum to Governor Ramesh Bais throwing light on the alleged malpractices of the ruling government.

Several thousand JPSC aspirants have been demanding cancellation of the recently conducted preliminary tests for JPSC 7 to 10 citing favouritism and anomalies in the system. Following widespread protests by students, JPSC recently released the category-wise cut-off marks for the exams and also answered queries of the candidates. However, student bodies, backed by political parties, still stick to their demand of cancelling the exams.