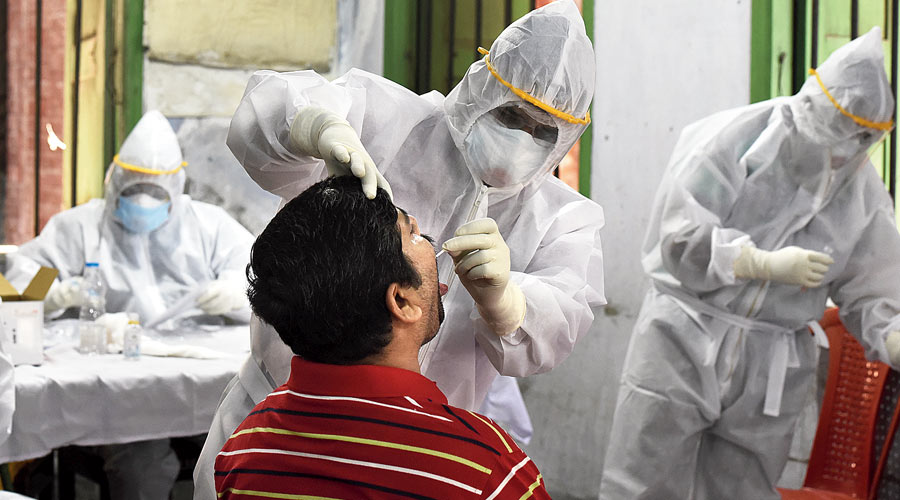 While most of the travellers will be tested through Rapid Antigen Tests, the ones suffering from symptoms of Covid-19 may have to undergo RT-PCR tests
File picture
Our Correspondent   |   Ranchi   |   Published 16.10.21, 04:47 PM

Jharkhand health department has directed all deputy commissioners to ensure Covid tests for inter-district travellers at entry points of the districts in the wake of a rise in the active caseload of Covid-19 amid the festive season rush, officials said on Saturday.

While most of the travellers will be tested through Rapid Antigen Tests, the ones suffering from symptoms of Covid-19 may have to undergo RT-PCR tests as a precautionary measure, officials said.

“The next 100 days are crucial in managing the Covid situation in our state. It is important to adhere to the Covid protocols during the festive season as any complacency may lead to a rise in cases,” Singh said.

As per government records, the count of active Covid cases has more than doubled since September 20, mostly due to the festive season rush at markets and other public places. Data compiled by the National Health Mission (NHM) reveals that there were only 55 active Covid cases in the state on September 20, and by Saturday, the active caseload jumped to 130.

While necessary guidelines for various festivals were issued by the government before Durga Puja, some of the norms were openly flouted as devotees thronged puja pandals and temples despite a government order restricting entry of devotees in puja pandals as a precautionary measure, sources said.

According to health experts, the movement of people from one district to another may cause a rise in Covid cases as socializing during the festive season might make maintaining social distance difficult.

Dr Ajay Kumar Singh, the state coordinator of Indian Medical Association (IMA) in Jharkhand, warned against complacency during the festive season and said that following social distancing norms until New Year was the need of the hour.

“We need to be more careful during the festive season, and also ensure vaccination for as many people as possible at the earliest,” said Singh.

Ranchi, which sees the highest number of inter-district and interstate travellers during the festive season, has been the worst-affected district in Jharkhand in terms of Covid cases and fatalities. As per government data, the active caseload of Covid-19 in Ranchi rose from 27 on September 20 to 61 on Saturday morning.