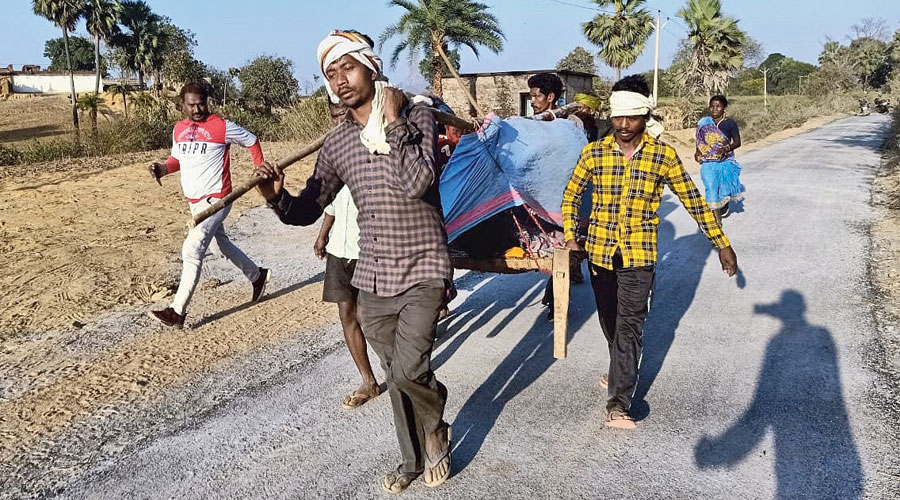 Jharkhand health department has served showcause notices to four truant doctors over death of a pregnant woman and her new born infant who was carried by her relatives on a cot for nearly seven kilometres only to die outside the community health centre in Giridih district’s Gawan block, over 226km north of capital Ranchi.

Principal secretary health Kamal Kishore Soan speaking to The Telegraph said that acting on the recommendation of the Giridih deputy commissioner (Rahul Kumar Sinha), they have been issued show cause notices.

“As per the deputy commissioner report they were found missing from the community health centre during the time of the incident which led to the death of the mother and the infant. We have issued show cause notices to all the four doctors and asked them to reply within a week as to why disciplinary action should not be started against them,” said Soan.

Significantly, the deputy commissioner of Giridih had in the probe report submitted to the state health department secretary on February 27 had clearly indicted the missing doctors carelessness for the death of the pregnant mother and the child at the community health centre (CHC).

“We had constituted a five member team led by SDO Khourimohua to probe into the incident. The report states that the acting in-charge health officer of the CHC had gone to Sadar Hospital in Giridih on the day of the incident (February 25). Another doctor (Dr Salik Jamal) was found missing from the hospital in the evening of that fateful day. If the doctor would have been present and started treatment of the mother and the child, both would have been saved,” the probe report (a copy of which is with this newspaper) submitted by the deputy commissioner states.

Relatives wait outside the hospital in Giridih on Thursday.
Picture by Bhola Prasad

The probe report further states that two other doctors who were newly appointed namely Dr Neha Kumari and Dr Irshad Ansari despite joining their duty on papers had not taken charge in the hospital and their absence also affected emergency treatment leading to the death.

The report lastly states that an Ayush doctor Dr Kazim Khan after seeing patients in OPD had gone home.

“Ideally the Ayush doctor should have been at the hospital till the in-charge health officer returned from the district headquarter which shows callousness towards responsibility,” the probe concludes recommending disciplinary action against all the doctors.

The incident took place on Friday in a village Lakshmibandh in Tisri block of Giridih district and since there is no motorable road leading to the village ambulances do not reach the village forcing pregnant wife Surji Marandi (20), wife of Sunil Tuddu to be carried on a wooden cot and walked seven kilometres to the Gawan community health centre. A midwife had delivered a child on Thursday but she could not remove the placenta and the bleeding continued. The midwife asked the family members to rush her to the hospital which made them carry her on cot.

The woman reached the hospital but passed away as there was no doctor to attend her at the hospital. The child had died earlier.