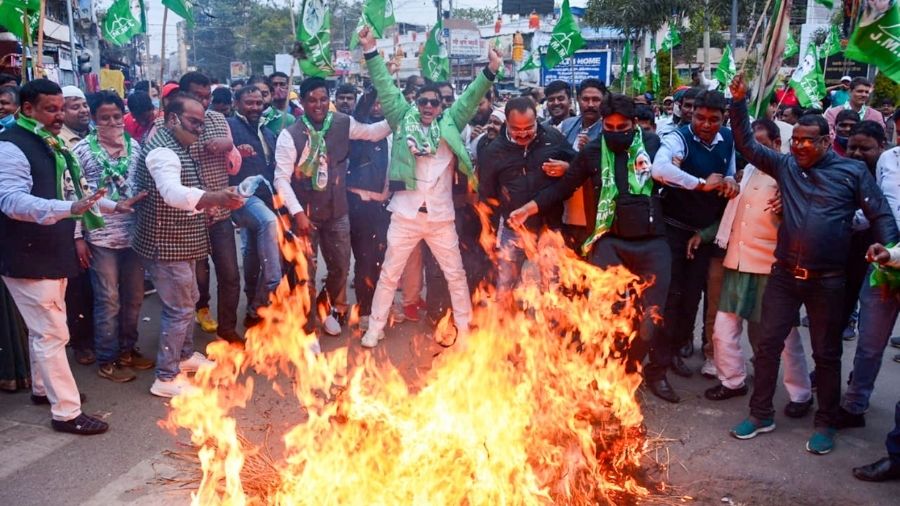 Two police officers were suspended on Wednesday for Monday’s attack on the pilot car of chief minister Hemant Soren’s entourage when a mob took to the streets at Kishoreganj to protest against the murder of a young girl whose headless body was found at Ranchi’s Ormanjhi area.

The move to suspend the OCs of Kotwali and Sukhdevnagar police stations came a day after the state government formed a two-member committee, comprising senior IAS and IPS officials, to probe the incident. Police have also filed cases against 68 named and several unnamed individuals.

On Tuesday, the chief minister’s office also indicated that showcause notices had been served on Ranchi SSP S.K. Jha and deputy commissioner Chhavi Ranjan for their inability to tackle the protest.

The body of the young girl, believed to be between 18 and 22 years of age, was recovered from a forest in Ormanjhi on Sunday, triggering a public outrage and political slugfest between the ruling and Opposition camps.

Sources said the medical board that conducted the post-mortem on the body had ruled out rape. But police were yet to confirm the finding. They had also announced a reward of Rs 50,000 for anyone with information on the case as the girl’s identity was yet to be established. A five-member special investigation team (SIT) has been set up to probe the incident.

Wednesday’s suspension orders were issued by DGP M.V. Rao in the morning while he was reviewing the law-and-order situation at Jha’s office at the district collectorate.

Rao told the media that action was taken against the OCs _ Sunil Tiwari of Sukhdevnagar and Brij Kumar of Kotwali _ for failing to gather accurate intelligence regarding the scale of the protest. He also added that action was being taken against those who were involved in Monday’s protest, calling it a ploy to attack the chief minister’s convoy.

“Police will not spare anyone for Monday’s violent protest. Continuous arrests are being made since Tuesday based on CCTV footage. No one is allowed to take the law into his own hands,” Rao said.

Both JMM and Congress have accused the BJP of orchestrating the violent protests. On the other hand, the police action prompted the BJP to criticise the state government for “silencing dissent” and deliberately targeting its workers on Tuesday and Wednesday. 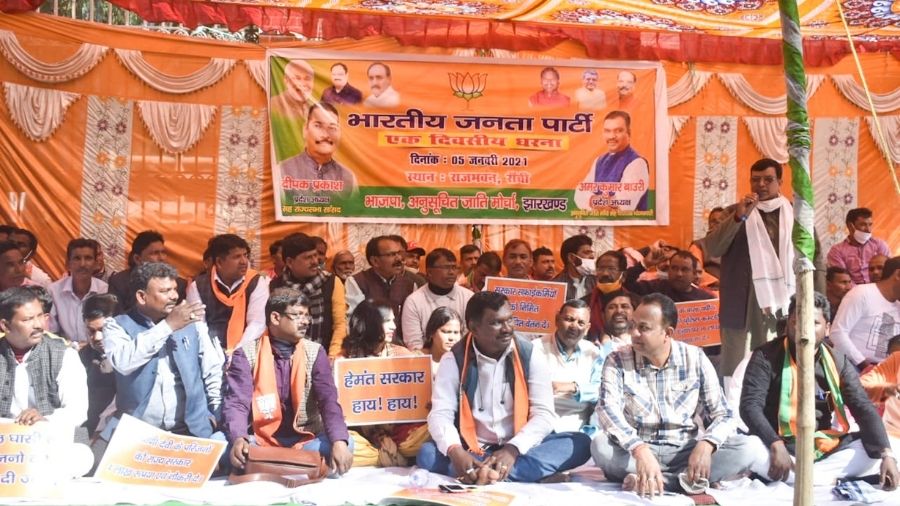 BJP workers protest against the state government near Raj Bhawan in Ranchi on Wednesday.
Picture by Manob Chowdhary

Leader of the BJP legislative party and former chief minister Babulal Marandi said that no BJP flags were carried by anyone during the Kishoreganj protest. The public outburst, he said, was spontaneous because of the pent-up anger against the government’s failure to control law and order.

“It is the failure of police in the first place. Whenever CM passes, roads are secured properly by road opening parties. How come so many protesters descended on the CM’s route without police knowledge?” Marandi said on Wednesday.

The administration, he said, was acting out of political vendetta to arrest innocent people.

“We also learnt about kids being picked up by police along with their families. Even some BJP cadres were reportedly nabbed. Protest is a democratic right of everyone. We would have welcomed if police had shown such promptness to probe the beheading incident,” Marandi said.

The JMM launched a counter-attack again. Party spokesperson and general secretary Supriyo Bhattacharjee claimed on Wednesday that those who attacked the chief minister’s pilot car and injured a policeman were linked to the BJP and had criminal antecedents.

“Some of the suspects who were caught on CCTV are seen to be taking pictures with senior BJP leaders on that day. This establishes BJP’s connection in the whole episode,” he said.