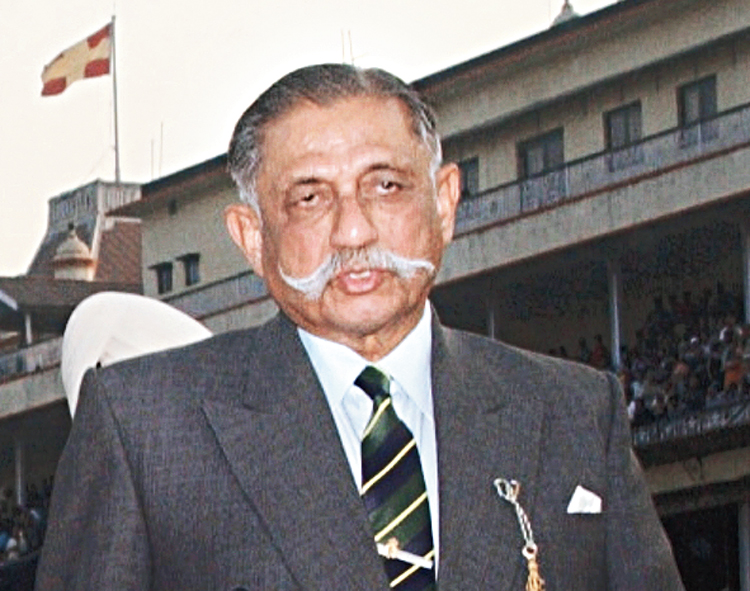 Former army chief Gen. Shankar Roy Chowdhury, whose name figures among the endorsers of the letter addressed to the President, spoke to The Telegraph on Friday. Excerpts:

Q: There is this controversy about who signed the letter….

Gen. Roy Chowdhury: Yes, I signed the letter. Like me, my many other friends have done it since it had the signature of the (former) chief of naval staff.

Q: What prompted you to raise your voice?

Gen. Roy Chowdhury: The Indian defence force is among the most loyal in the world. We are totally loyal to the government. We are damn good. Pretty good. The reputation of the army, the values of the defence forces... they shouldn’t be dragged into this election campaign. All kinds of slogans are being raised. The army should be out of it and above it. The defence forces are not concerned with the politics of the country. They function on the directions of the government in office, whoever that government may be.

Please remember 1971 (the Bangladesh Liberation War). Then there was a strong slogan — coined by Deb Kanta Barua — ‘Indira is India and India is Indira’. And it was used with great effect in the elections that followed. Great effect. Jai Jawan, Jai Kisan… Lal Bahadur Shastri, full credit to him. So all these things happen. These things have happened in the past.

The shame of 1962 (the China-India War) had to fall upon the Congress…. The glory of 1971 fell upon, again, the Congress. They benefited from it. And why not?

Q: What about seeking votes by citing the Balakot strikes?

Gen. Roy Chowdhury: That is very wrong. Voters don’t have to be told about the Pulwama attack. The Pulwama attack, if it is a factor in the election campaigning, speaks for itself. I don’t remember Indira Gandhi asking for votes on Bangladesh. But it came to her. The effect of Bangladesh was felt in her elections…. These are the effects of a war or a battle. And the government in office has to bear the burden or the glory that comes from it.

Q: So, what’s wrong this time?

Gen. Roy Chowdhury: It’s the same process. Just that the language has gone bad. This type of language was never there, never at least in Indira Gandhi’s time…. The words that are now being pronounced… boro baaje laage shuntey (feels very bad to hear such words….

….Unfortunately, there are some people and what can we do about it? ‘Ramzada (born out of Ram)’ and ‘Haramzada (Illegitimately born)’ — how does it sound? Illiterate, its very jarring to the ears… but this seems to be the language of politics nowadays. No one wants to be called ‘Haramzada’.

Gen. Roy Chowdhury: The Prime Minister has not said such a thing. (Footage showed the Prime Minister ask a rally in Maharashtra on Tuesday: “I wish to ask you, my first-time voter, can you dedicate your first vote to the valiant soldiers who carried out the air strike in Pakistan’s Balakot?) The sadhvis or somebody… three to four sadhvis and a few mahants… Like this Yogi… the chief minister of Uttar Pradesh Yogi Adityanath. I guess it’s probably not right to specifically ask votes for Pulwama…. I haven’t heard Indira Gandhi asking that ‘won’t you vote me for Bangladesh?’ Or something like won’t you give me your votes for nuclear explosion?

For Balakot, the country must support the government. Though it is better that the country is secular and a secular force like the army should not be involved in the politics.

….Certainly Balakot should be played up as an achievement of the Indian Air Force and the impact of Balakot may or may not translate into actual votes. In the case of Indira Gandhi, it did translate. But whether you bring up the great deeds of the forces in a political rally is a matter of choice really.

Q: Why did you to protest this time?

Gen. Roy Chowdhury: Because we are being pulled into political discourse. Don’t pull us into all this. We are apolitical. We don’t want to be caught up either in your Congress comments of Rafale or Balakot strikes.

Gen. Roy Chowdhury: See, we need Rafale aircraft. You can carry on with the mud-slinging. That is the job of politicians. The government may get fed up and say chalo chhoro (Let’s drop it). That’s my fear.