It is celebrated on November 21 to recognise the contributions of millions of fisher folks, fish farmers, and people involved with the fishery trade across the globe 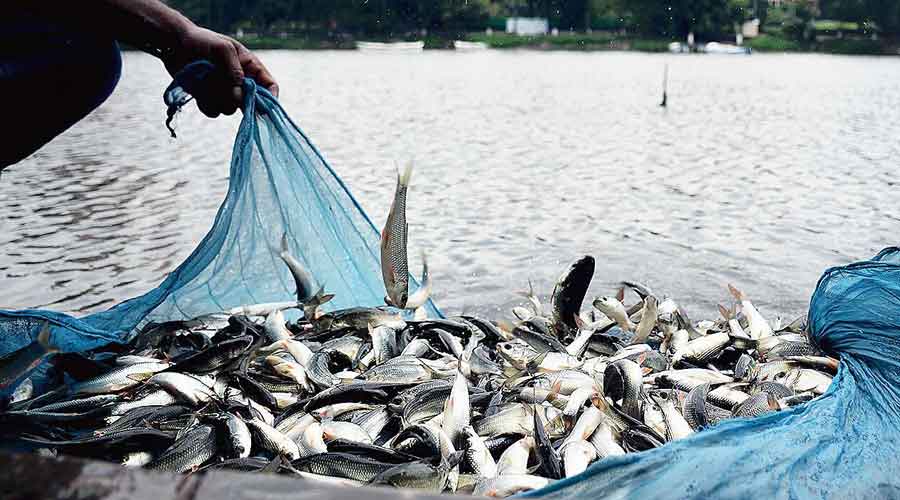 Balasore district on Sunday received India’s “Best Marine District” award on the occasion of World Fisheries Day 2021. The award ceremony was organised by the ministry of fisheries, animal husbandry and dairying, in Bhubaneswar.

The  World Fisheries Day is celebrated on November 21 to recognise the contributions of millions of fisher folks, fish farmers, and people involved with the fishery trade across the globe. Handing over the award to Odisha government’s director of fisheries Smruti Ranjan Pradhan, Union minister for fisheries, animal husbandry and dairying, Parshottam Rupala, said India aims to achieve Rs 1 lakh crore revenue from the fisheries sector including the marine products.

He said the country aims to achieve a target of producing 22 million metric tonne of fish by 2024-25. “With the active support of the young entrepreneurs, the target can be achievable,” said Rupala. Minister of state for fisheries, animal husbandry and dairying and ministry of information and broadcasting L. Murugan was also present on the occasion.

“Odisha is the fourth largest fish producing state in India with 8.73 lakh metric tonnes of fish produced during 2020-21 contributing to 2.33 per cent of the state economy. Over the last five years, the fisheries sector has grown at an average annual growth rate of about 13 per cent in Odisha,” said R. Raghu Prasad, secretary, fisheries, Government of Odisha.

“The demand for fish in Odisha is huge, since around 94 per cent of the 45 million population in Odisha consume fish. There is huge demand for Odisha fishery products in international markets such as USA, Europe, Japan, China, ASEAN countries and Middle Eastern countries. The seafood exports from the state have tremendously increased by 9 folds in the last 20 years and reached Rs 3,108 crores with a volume of 61,000 tonnes during 2020-21,” said Pradhan.