Why no one cares even if it’s ‘Aila plus Bulbul’ 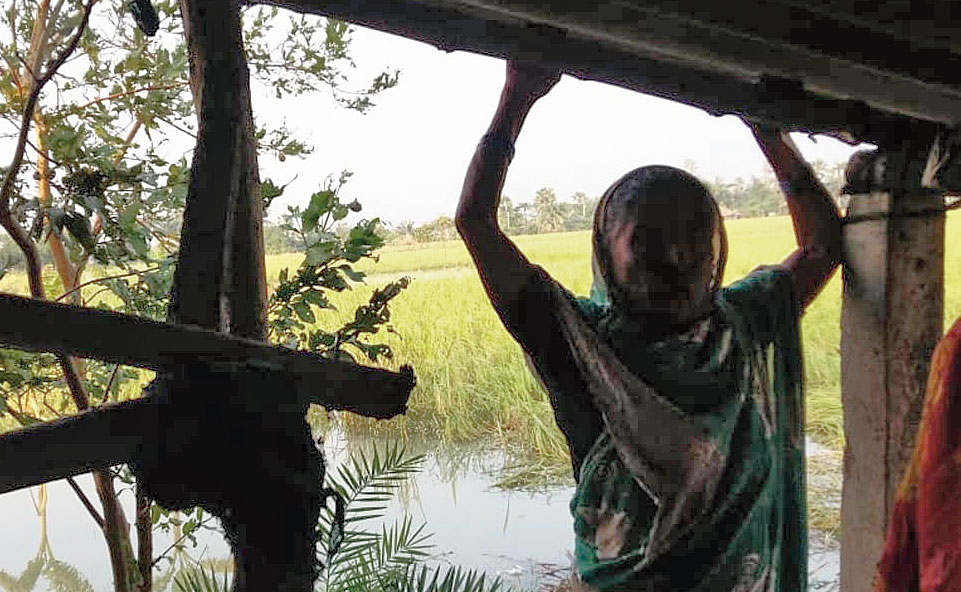 Parijan Bibi standing in front of a house whose wall was blown away by Cyclone Bulbul.
Picture by Chandrima S. Bhattacharya
Jayanta Basu   |   Published 01.12.19, 08:53 PM

On Mousuni island, devastated by Cyclone Bulbul, a group of women gathers around this team of reporters. “We will take you where no one goes,” one of them says.

We get off the raised mud road that cuts through the Bhanganpally area of Mousuni, an island on the southern extremity of the Sunderbans facing the brunt of the sea, and step down to the level of fields and houses that lie flattened. Trees have fallen across fields, their large messy roots up in the air, resembling severed heads.

Cyclone Bulbul is the strongest storm in the living memory of the Sunderbans.

The cyclone, which made landfall on November 9 close to Sagar Island, devastated a large area in the Indian Sunderbans, including Mousuni. Many feel the damage, running to thousands of crores of rupees, may be comparable to the losses that followed Cyclone Aila in 2009, or even worse.

But there’s the visible part and the unseen, or overlooked.

“Come this way,” says Parijan Bibi, the eldest woman in the group, taking the lead. She hurries past drowned paddy fields — almost all of the paddy, a Sunderbans mainstay, may have been lost — and through narrow alleys that snake between the mud houses, collapsed in different ways, till she halts in front of the last house in an alley, a mud hut that looks surprisingly intact.

“Come in,” she says. The sidewalls are standing, but the wall that should have faced the visitors has been blasted away by the cyclone. A large hole stands in its place, through which you can only see more dead trees and torn-down houses.

Paddy that was almost ready to harvest damaged by the cyclone. Almost all of the paddy, a Sunderbans mainstay, may have been lost.
Picture by Jayanta Basu

The hut belongs to the elder brother of Parijan Bibi’s husband. Cyclone Bulbul boasted a far stronger speed than Aila’s and was the strongest storm that Parijan Bibi or even older villages have seen.

“But no one came here. The panchayat leaders take a short walk on the road and go away,” says Parijan Bibi.

On November 12, it’s Day 3 after the cyclone has struck, but no one has visited the villagers, no relief has arrived. The hut of a relative of Parijan Bibi is a cul-de-sac that opens into a vast hopelessness.

The reporters were on the ground on November 12. Nearly 20 days after that, on Sunday, some of the residents in the region said that apart from tarpaulin sheets, rice and a few other utensils, they had not received any relief.

Even this appeared sporadic. “I have not got anything at all,” Mouluddin Khan, who lives in Kusumtala, said.

Mousuni is additionally vulnerable in the Sunderbans. The sea level is rising alarmingly fast across the entire Sunderbans, and Mousuni, which has no proper bank protection against either the Bay of Bengal or the Chinai river, is shrinking fast, displacing people and making living conditions difficult. The name Bhanganpally is significant; “bhangan” means erosion.

“I am 75 and in my lifetime I have never seen a stronger cyclone…. Look, how most of the houses have been damaged,” says Sheikh Montaj from the Kusumtala area of Mousuni. Montaj too complains, with everyone around him joining in, that hardly any relief has arrived and that the panchayat has done nothing.

“In the Sunderbans, we have four assets: dhaan (paddy), pan (betel leaves), sabji (vegetables) and maachh (fish). All four have gone this time,” says Ramakant Giri, an elderly man on his way in a Toto to a ferry ghat in Mousuni.

A carcass lying on Fraserganj beach that was destroyed by Cyclone Bulbul, with nothing left standing.
Picture by Jayanta Basu

The impact of Bulbul is being overlooked by local authorities, largely.

“See, so many houses are so badly damaged, but the panchayat members still have not the time to prepare a proper report. They are only interested in supporting people who are close to them,” complains another man.

“Local Trinamul leaders are now doing what the CPM did after Aila and the opposite of what Didi (chief minister Mamata Banerjee) has asked them to do,” says a middle-aged farmer in Mousuni, who lost his house and his betel leaf crop.

The complaints of lack of attention or relief contrast with the official voices. Mamata had visited the Sunderbans the day after the cyclone struck and declared a compensation of Rs 2 lakh each for the families of those killed during the storm. About 20, considering official and unofficial estimates, are feared dead.

Mamata has pegged the cost of the damage from Bulbul at Rs 24,000 crore.

State Sunderbans affairs minister Manturam Pakhira feels the damage from Bulbul is bigger than that caused by Aila. “Clearly, the overall impact of Bulbul has been greater than Aila’s, with huge losses in agriculture and infrastructure,” says Pakhira.

“About 12 of the 19 blocks in the Sunderbans have been affected, most of them entirely. During Aila, apart from Gosaba, the other blocks were affected partially.”

Mousuni, Sagar and Bakkhali, in the western Sunderbans, bore the brunt of Bulbul. But Namkhana, Patharpratima and Kakdwip in the west; Sandeshkhali, Hingalganj, Hasnabad and Basirhat in the north; and Gosaba, Basanti and Jaynagar in the east too have been affected.

“Unlike the aftermath of Aila, crops and fish production have been largely damaged. Numerous mud houses have collapsed; trees and electrical posts have fallen,” a man said.

Then why is Bulbul not a talking point?

Because, first, storms too are liable to stereotyping and Aila remains the blockbuster cyclone. For the same reason the high tide in the Sunderbans on July 12, 2014, which rendered 30,000 people homeless, went unreported.

True, the Bulbul death toll was lower as the state government had evacuated about 1.78 lakh people from vulnerable pockets. And the river waters did not flood in.

During Aila, vast stretches of the Sunderbans went under saline water as the cyclone swept through the area during high tide. Bulbul almost coincided with low tide; the Sunderbans were ravaged but not drowned.

Since the homeless, whose number may not be smaller, are not standing in waist-deep water or leaving for Calcutta, Bulbul’s impact is being measured not in terms of the actual damage but visually, in comparison with Aila.

Or maybe a big city like Calcutta needs to be affected directly for it to look at “back-of-the-beyond” places like the Sunderbans. Aila had damaged the city as well. Besides, within days a steady stream of people from the Sunderbans had poured into various parts of the city.

In the Sunderbans, however, there is another reason that the authorities are not reaching out to the people. The people are so angry at neglect from the local panchayat — and from much before Bulbul — that they promise a government representative will be sent packing if he or she arrives.

“Let them come once,” warns a villager in Mousuni. He is one of the few men in Dharamapally. Mousuni, like many parts of the Sunderbans, has sent most of its men away to cities near and far to work as migrant labourers.

The after-effects of Aila are still visible in the Sunderbans, all the more reason to address the damage done by Bulbul.

Mousuni’s panchayat pradhan could not be contacted despite repeated attempts. Srimanta Mal, a senior Trinamul leader and functionary of the South 24-Parganas zilla parishad, defends his party colleagues at the panchayat level.

“We, including the local MP, had visited Mousuni, including its more vulnerable parts like Baliara and Kusumtala, and provided canvas and rice to the affected families. The MLA has also sent relief from his quota,” says Mal.

A local Trinamul leader, however, said the MP and the MLA had had to rush in sensing the growing local resentment.

In Fraserganj, Bakkhali, Bulbul has left nothing standing.

“We experienced Aila and even the recent Cyclone Fani, but never saw anything like this,” says Archana Dhali, in her thirties, standing in front of a razed structure on Fraserganj beach, about an hour from Mousuni by road and a boat ride. She is trying to rebuild her home-cum-tea-store that Bulbul destroyed.

Many in the area make their living by selling shuntki maachh (dried fish). “All the nearby dry fish centres, which we call khotis, have been destroyed.”

A dead calf lies near her on the beach: no one has had the time to remove the carcass. No one had eaten a single meal of rice since the cyclone struck, cutting through the entire Indian Sunderbans.

“The damage to the dry fish business in Sagar amounts to around Rs 52 crore; but the damage in the Fraserganj area will be around Rs 100 crore,” says Milan Das, secretary of the South Bengal Fishermen Association.

A senior government official said that according to an initial estimate, the damage caused by Bulbul is close to Rs 24,000 crore. About 3.5 million people have been affected; 5.17 lakh houses damaged and more than 6,000 electrical poles and several lakh trees fallen.

After Aila, according to an unpublished report by the disaster management department of the Bengal government, the gross loss was about Rs 1,800 crore and about 1.26 lakh hectares of land was damaged.

But an estimate prepared by Tuhin Ghosh of the oceanography department of Jadavpur University has pegged the Aila reconstruction figure at Rs 5,000 crore, including contributions from the state and Union governments and humanitarian agencies.

The India Metrological Department’s regional director, G.K. Das, says Bulbul not only had a greater maximum speed than Aila — 135kmph to 120kmph — but it had also progressed west to east of the Sunderbans, crossing almost the entire island area, unlike Aila which had moved south to north.

“Aila wandered over the Sunderbans for a long period and maximised the damage, but unlike Bulbul it moved south to north,” says Sugata Hazra of the oceanography department in Jadavpur University.

Sunderban residents, however, say that Bulbul too raged for close to six hours, from November 9 night to November 10 early morning.

Subhas Acharya, a Sunderbans specialist, feels that though Bulbul has caused widespread damage, Aila has had a greater long-term impact as it turned a large portion of the land saline and unsuitable for agriculture for a few years.

But these comparisons should not matter. The aftermath of Bulbul has to be looked at. There can be no benchmark for damage.