Why I miss Dr Singh

A month on, what the young have taught us 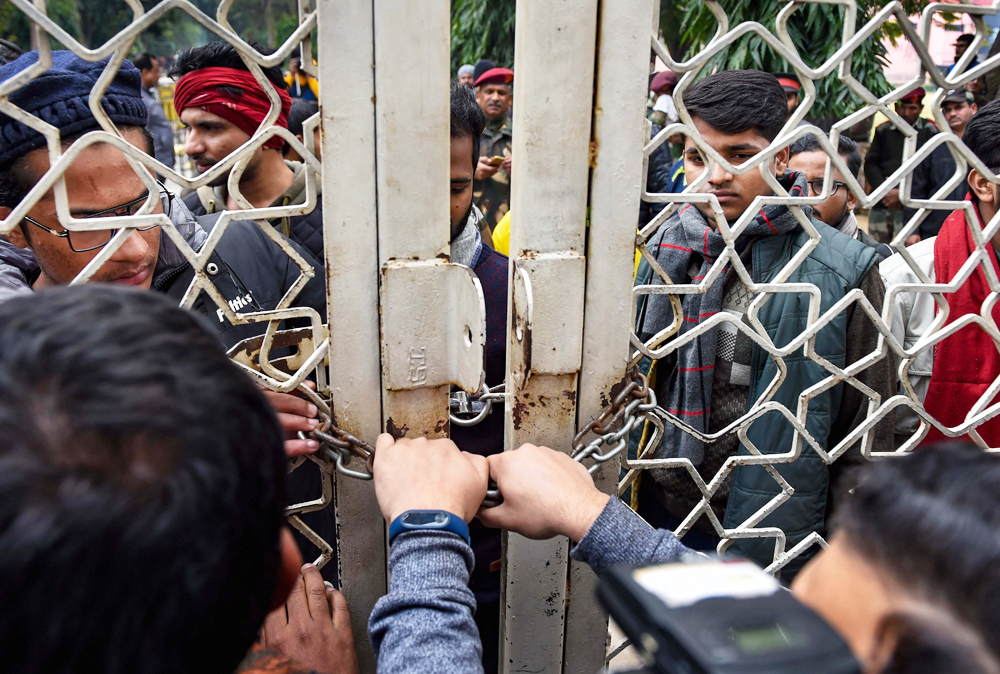 Jamia Milia Islamia University students attempt to break a lock during a protest against their Vice Chancellor Najma Akhtar, demanding registration of an FIR against Delhi Police in connection with last months violence inside the campus, in New Delhi, Monday, January 13, 2020.
(PTI)
Vikas Pathak   |     |   Published 13.01.20, 10:05 PM

Some years back, on a December afternoon, crowds of young people had spilled onto the streets of Delhi to protest the gang rape and murder of a girl — an incident that led to enough outrage for the rape laws to be changed.

I was at Jantar Mantar one afternoon in the midst of the protests when loud jeers were heard from the crowd. The crowd was heckling Sheila Dikshit, then chief minister of Delhi, who had come to the spot to light a candle in memory of the girl. Dikshit lit the candle and left immediately, the crowd continuing to heckle her as her vehicle drove away.

It seemed these were times like no other in the capital. From the Lokpal protests to the protest against the gang rape, freedom of expression oozed onto the streets of Delhi, with policemen quietly watching as people swarmed the roads, except for a couple of instances of police action.

The contrast with the present cannot be sharper. Students at the Jamia Millia Islamia university have borne the brunt of police action for protesting the Citizenship (Amendment) Act. Vandalism outside the campus invited severe police action inside it.

Not even the library was a safe place any longer. Students at Aligarh Muslim University also faced the severest police action. And students at JNU — protesting fee hikes — have been lathi-charged multiple times. But the police did not act to protect them when armed, masked men brutalised students in hostels and left behind heart-rending images of a bleeding student and a bleeding professor.

Contrast this with the times when many of us, including me, thought we were under the “worst government” ever.

The term of Manmohan Singh was the one that saw public protests become an everyday occurrence. People marched to influence the process of lawmaking. And they marched to seek justice for a rape victim who died of brutal injuries.

A couple of condemnable instances of police action apart — like the use of water cannons on the gang-rape protesters and the tear-gassing of the crowd at the protest of yoga guru Ramdev, leading to the death of one elderly woman — the period marked the high point of Indian democracy. People seemed to have taken charge of the republic, marching mostly peacefully at India Gate, Jantar Mantar and on the streets abutting Ramlila Maidan.

These sights would be pregnant with the possibility of the world’s largest democracy finally coming into its own. The purported authors of the Preamble — “We, the people of India” — seemed to have decided to be heard, and counted. They were proud citizens, not deluded subjects, and they wished to have a tough Lokpal law enacted and rape laws tightened.

The Manmohan Singh government set an example for what a democracy should look like. The anti-corruption mood — propelled by reports on the Commonwealth Games, Adarsh Housing Society, 2G spectrum and coal block scams — led to Anna Hazare’s Lokpal agitation.

An ageing man from a Maharashtra village would be covered live by all television channels openly criticising the government of the day. Arvind Kejriwal would openly call the ministers thieves. Yet the police would be a peaceful bystander.

For more than 10 days at a stretch, I stayed at Ramlila Maidan till late at night. People would lustily raise slogans against Sonia Gandhi, Manmohan Singh and Rahul Gandhi. Traders would feed the crowds.

The Tricolour would flutter all around. Sometimes, young men without helmets would ride bikes on the roads near the ground with Tricolours, with no challans despite traffic rules being broken. And Hazare would remind the gathering of the sacrifices of Bhagat Singh, Rajguru and Sukhdev.

The government responded by agreeing to a discussion on the Lokpal in Parliament, with Pranab Mukherjee setting the tone by lavishly praising Hazare. People saw all this as mere pretence, and the anti-Congress mood — generated by presumptive loss figures from a CAG report few could understand — continued.

Unfortunately, the best of times are made sense of only in retrospect. For, they come disguised as a hope; as a future possibility. And their futuristic promise makes the present seem bleak.

In those days, protest seemed to most a right. Parents would not prevent their college-going children from staying at the protest site. Families would come with their toddlers, telling their children about Mahatma Gandhi. Everyone at the Anna protests felt safe. The protest site was a home away from home. It was the heart of a throbbing democracy, as it were. 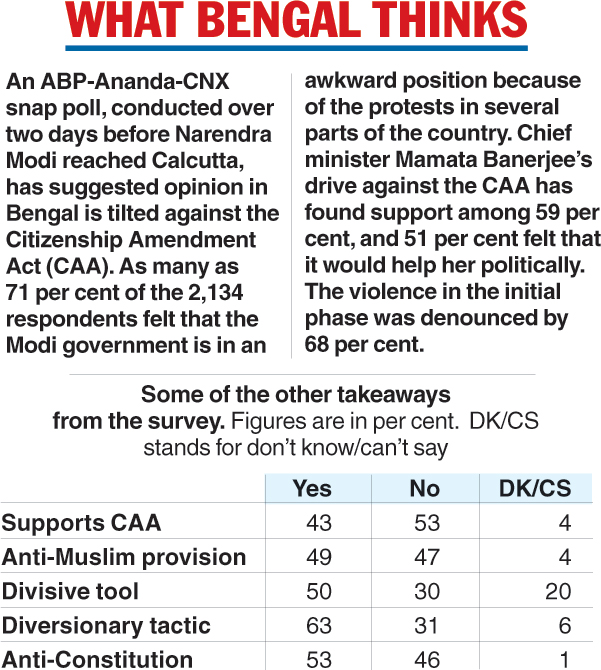 The futuristic hopes did lead to electoral debacles for the Congress. Manmohan Singh was painted as a mere stooge. It seemed the man occupying the position of the head of government was the most introverted and weakest man in the country. True, when democracies are on the move and leaderships bow to the popular tide, something that the poet Ramdhari Singh Dinkar called “Jan Ganga” (the Ganga of the masses), leaderships look weak. The masses, on the contrary, look strong. The Preamble comes alive, with the people seemingly in command and authorities just public servants, or what they are supposed to be.

In retrospect, one realises the democratic depth of the Manmohan Singh era. It sustained democracy but lost the election, one of the formal expressions of it. Rahul Gandhi got publicly humiliated by Arnab Goswami before the 2014 elections in a much-publicised interview. Yet, the interview went on air. The losses for the Congress came in various ways: on the streets, in TV interviews and finally in the polls.

The UPA government was replaced with a strong government, looking far stronger than the masses and towering over the polity. It has become stronger with each passing year, reducing the Opposition to pulp in 2019.

In a democracy, the strength of the leadership is inversely proportional to the depth of liberty. The first five years saw public protests die out as people mechanically went about their work and thought being democratic meant just casting their vote.

Late in 2019, the youths finally hit the streets again in protest against the Citizenship (Amendment) Act and university fee hikes. Young India again took the lead, as they had done during the Lokpal and Nirbhaya protests.

But this time the police had come alive. They were quick to attack students at Jamia but slow to protect students facing attacks from masked men at JNU. The state seemed powerful, but democracy seemed weak in a deliberative sense. Some incidents of violence were painted as the very nature of the protests. JNU students were repeatedly thrashed without any retaliatory violence from them.

A student in Delhi who wished to attend a protest told me that her parents had refused to allow her to attend these, warning they would not be able to protect her if she got detained. Another sent me a write-up and asked me to upload it without mentioning her name.

The police suddenly seemed strong as an agent of a no-nonsense discipline. It seemed weak as a protector of the unarmed. These times, unlike the Manmohan Singh days, are not brimming with any great hopes for the future, economically or socially. The long road of peaceful protest seems endless.

I recall the visit of Manmohan Singh to the JNU campus just before I was leaving the campus. Students from Left organisations showed him black flags. Manmohan Singh took it in his stride, saying he would defend to death the right of people to disagree with him.

Manmohan Singh had said in 2014 that history would be kind to him. Perhaps he was right: his was the time when common people felt empowered. In contrast, he seemed weak. It was weakness that came from grace. It was weakness that made the freedom of expression — subject to reasonable restrictions — stand tall.

When history is written to portray the times of empowered citizens as good times, it will see Manmohan Singh as an admirable public servant. He will perhaps never be a leader. That doesn’t matter, as democracy at its best turns leaders into public servants and masses into critical citizens.

We miss you, Dr Singh. You are part of a past we value.